The fires ignited roughly a kilometre southwest of Cox Lake near a logging road called Spur 10 at around 8 p.m. Sunday.

As of Monday evening, the larger of the two fires has shrunk from 4 hectares (9.88 acres) to 3.45 hectares (8.5 acres) and remains out of control while the smaller blaze is still at 0.30 hectares (0.74 acres) in size but is under control.

Both fires are suspected to be human-caused, according to the BC Wildfire Service.

Colin Murray, a Port Alberni area resident, said he first noticed something was going on when he saw that the hillside was glowing.

“We saw the glow on the hillside. Pretty scary that’s for sure. It went up the hillside and in half an hour it was up to the top of the timber there,” he said.

“Once we were able to bring that [smaller] fire under control, BC Wildfire asked that we assist and attend the [larger] wildfire, which we ended up doing until 8 a.m. and Sprout Lake and Cherry Creek remained on scene.”

By Monday morning, a new firefighting crew had been brought in and continued to battle the blazes.

“We have fresh resources on that fire. We have 13 firefighters, two water tenders and an excavator and helicopter are working on that fire … and I understand that they are making good progress,” said Caranci.

Caranci said with the current resources and conditions, the fires aren’t expected to expand. However, she also said the blazes are located in a heavily-fueled area with steep terrain, which can present additional challenges for firefighters.

“It can be challenging when you have very dense fields because those fields can cause a fire to burn in a stronger manner,” she said. “A lot of fires in the coastal region happen in areas that are difficult to access are in remote terrain. And so this is something that we’ve become very good at.”

Another concern has been the winds. Environment Canada issued a special weather statement warning of winds of 40 km/h gusting to 60 km/h that could last into Monday night throughout most of Vancouver Island, including Port Alberni and the Cowichan Valley.

“At this time, it has not affected our operations to date or challenged any of our existing control lines. But as we are expecting the winds to continue to pick up, there could be some challenges for us,” said Caranci. “It obviously can hamper flying if it becomes too windy. Also, we have to think about first responder safety, which is our number one priority in these situations. So if conditions become so windy that there are dangers present for our people, then that is our first priority to keep our people safe.”

But with the smaller of the two Port Alberni fires under control, the majority of the focus by crews is on the out-of-control blaze. Caranci said that a small crew continues to monitor and deal with the smaller blaze.

“They will do what’s called a mop-up and patrol,” Caranci explained about the crew dealing with the smaller fire. “That means they patrol the fire and ensure that there are no hotspots and if they do find any hotspots, they extinguish it and they will carry on with that stage of control until the fire can be called out.”

In addition to the wildfires in Port Alberni, crews are also battling an ongoing wildfire near Riverbottom River Road in the Cowichan Valley.

Caranci said the Port Alberni fires aren’t taking away the BC Wildfire Service’s resources to fight the fire in Cowichan.

“We have what’s called preparatory levels and we prepare for events and ensure that we have enough personnel for any situation that may arise,” she said. “So yes, both fires are adequately staffed at this time.”

Albert Hols, a Sahtlam resident who lives near the fire burning across from Riverbottom Road, said the fire looked much better Monday.

“Looking at it, it looks better but it would be better if it was out,” Hols said. “If the wind does pick up this afternoon and jump across, there’s a whole lot of people that live near this area. So you wouldn’t want anything to happen that way.”

Caranci stressed that in the case of either the wildfires in Port Alberni or the one in the Cowichan Valley, there is no immediate risk to human life or critical infrastructure.

Meanwhile, Owens said the Port Alberni Fire Department isn’t expecting to be called back to help out with the wildfires at this point, but that could change depending on whether the fire spreads or BC Wildfire Service requests their help.

“If it does make a run towards the city then we will certainly reengage, but at this point, BC Wildfire Service has been able to staff up adequate resources in order to deal with the fire,” he said.

The #BCWildfire Service is responding to the Spur 10 #1 wildfire (V72642) south of #PortAlberni on #VancouverIsland. This incident was reported yesterday at approximately 8 p.m. and is burning in heavy fuel and steep terrain. 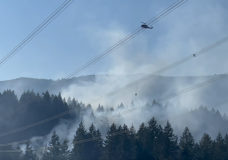 Wind warning has wildfire crews ready for any potential flare-ups 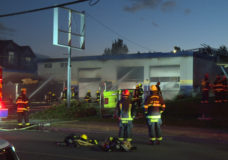