Posted: Jul. 7, 2019 6:44PM | Last Updated: Jul. 7, 2019 6:52PM
CHEK
WatchPeople are calling it shocking and disgusting. Holes in the walls of a portable washroom in a Central Saanich campground. police now warning the public that they could've been used by a voyeur. Luisa Alvarez has the latest.

Whether you are a camper or just a beach-goer many come to Island View Beach by the campground for exactly that the views.

But after three holes mysteriously appeared on one of the portable washrooms, police worry they could have been used for looking for a different kind of view.

“Somebody put them there they didn’t drill by themselves,” said John Argau who frequents the area.

Officials say they may have been used by a voyeur.

“Examination found 3 holes cut into the wall of one of the portable toilets, which could provide a view inside. Officers are concerned that the holes may have been used to infringe upon citizens’ privacy. Police are actively taking steps to protect the public and investigate the incident.” said Central Saanich police in a statement.

“You know one comes here for some enjoyment and relaxation and you should not have to worry about something like that,” said camper Cesar Mateos.

The holes were first found by CRD Park staff who reported them to police, but those who spoke to CHEK News Sunday say they haven’t noticed anything out of the ordinary.

“We’ve been here since Thursday and haven’t seen anything at all,” said Glen Chipper who is also camping.

The bathroom is located by the campground near a shed that looks as if it would be watched by CRD staff, but according to some campers it’s mostly empty and there is not a big staff presence in the area — so it could have been easy for someone to drill the holes undetected.

“You see them in the morning that’s it. They should have somebody at least coming in the night to check on stuff, ” said Chipper.

The vandalized bathroom has now been taped off and taken out of service, but people are reacting to the possibility that they could have been spied on.

“I think it’s just really disgusting and disturbing that someone actually drilled holes in the toilet in the bathrooms and I don’t know why they are still charging us to stay here for that,” said camper Savannah Sedgman.

“Good heavens there is enough sex on T.V. and all the other stuff do they really have to watch people going to the bathroom?” said Arlene Edwards.

Police say at this point they are not actively looking for any suspects and they have not had any complaints of the holes being used to spy on people but they want the public to keep an eye out and report any suspicious activity.

Anyone who may have seen suspicious activity in the Island View Beach Campground between July 4th and July 6th is asked to contact them at (250) 652-4441 or Crimestoppers. 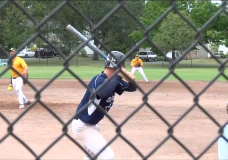 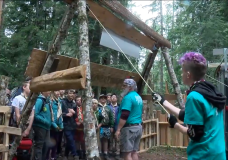 Thousands of Scouts on Vancouver Island for pacific jamboree