Posted: Feb. 16, 2022 6:47PM
CHEK
A third protest held at the B.C. Legislature over the weekend has some calling on the City of Victoria to enforce noise bylaws. Jasmine Bala reports.

An online petition has been created calling on the city of Victoria to enforce noise bylaws during weekend Freedom Convoy protests at the BC Legislature.

For the past three Saturdays, thousands of people have gathered at the legislature to protest COVID-19 mandates and public health orders. But with large crowds, comes noise.

“It was deafening,” said Dave Thompson, a governance consultant and candidate for city council. “I had earplugs in and it was still painful.”

Thompson said the constant sound of horns, vehicles revving their engines and blaring loud music for several hours every weekend has significantly affected those living nearby.

“This is probably the loudest noise we’ve ever heard in Victoria and we have that noise bylaw for a reason and I think the city needs to enforce it,” he said.

So he created a petition in response, calling on the city to immediately enforce the bylaw through issuing tickets to every driver violating it, and if that fails to eliminate the noise, then apply for a court injunction against bylaw violations.

The city’s noise bylaw states a person must not make noise in public place “which disturbs or tends to disturb the the quiet, peace rest, enjoyment, comfort or convenience of persons in the neighbourhood or vicinity.”

Under Victoria’s Streets and Traffic bylaw, drivers should not sound their horns unless it’s to “give reasonable warning to persons using or about to use a street, of a hazard or danger arising out of the presence or approach of the vehicle.”

Section 99 of that same bylaw also states street processions require a permit. The city of Victoria has confirmed to CHEK News no permits were sought for the protests at the legislature.

“I really support the right to protest but it looks like the target of this protest is the people of Victoria rather than the government and that needs to change,” Thompson said.

But protestors say the point is to make themselves heard to those inside the building, not disturb neighbours.

“The people that can stop things happening, get rid of the so-called mandates are in that legislature,” said Gordon Watson, one of the protestors. “That’s who we’re trying to reach.”

And the horns are one way to get them to listen, he said. “The honking is a scream of frustration, that’s what it is.”

But Watson said he understands people may be frustrated by the noise and is advising other demonstrators to honk responsibly.

“[There’s been a] suggestion to us we be more respectful of neighbours, of course we agree,” he said. “So what we’re going to try and do is just help advise people to honk when they’re going by the front door because yes the MLAs are in there, yes. And just tone it down when you go around the block. That’s a good compromise. I’m all for that. That’s an intelligent thing to do.”

However, he added, it’s ultimately up to those in their vehicles. All he can do is advise them.

“You have a spontaneous expression of frustration and it is leaderless, its leaderless resistance,” he explained. “OK, so there’s nobody here whose going to take charge and put all those people in their place, that’s not going to happen.”

When it comes to enforcement, Victoria police say their approach to protests is two-fold. One is to protect public safety and ensure people are able to exercise their rights to safe, peaceful and lawful protest. The other is to respond to dangerous or unlawful acts with de-escalation and enforcement.

CHEK News has asked VicPD how many tickets have been issued relating to these bylaws. They did not respond before deadline. 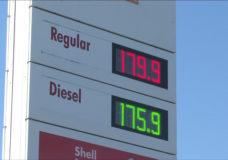 Rob Shaw: Why B.C. can't, and won't, do anything to bring down the price of gas 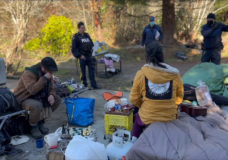