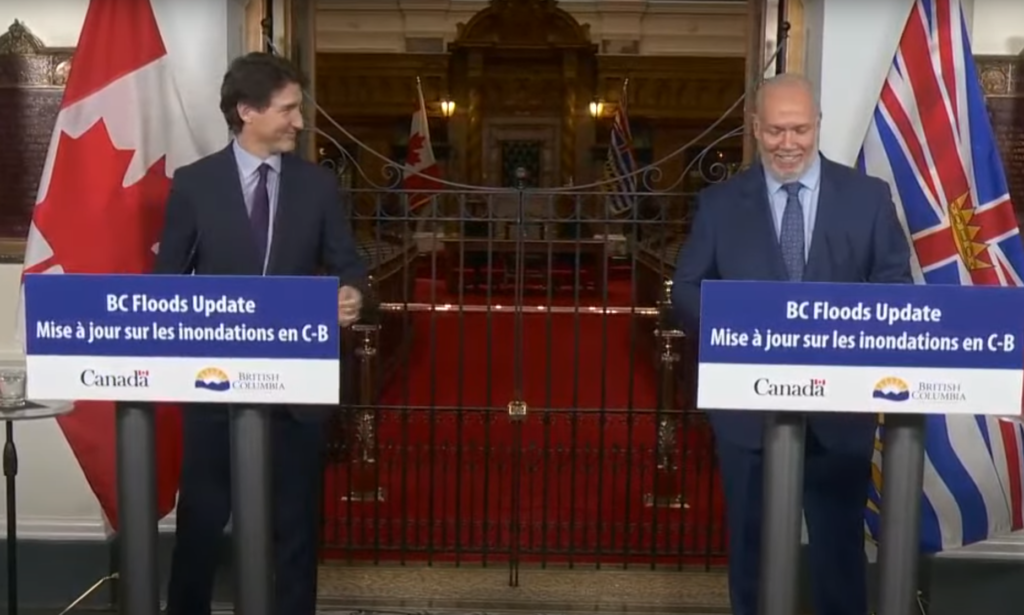 The federal and British Columbia governments have created a joint committee of cabinet ministers to deal with the devastation caused by flooding, while also promising to match donations given to the Canadian Red Cross.

Prime Minister Justin Trudeau and Premier John Horgan made the announcements Friday night after meeting about the flooding situation.

Horgan said a specific request for federal funding on the rebuild wasn’t made by B.C. because it is premature, but Trudeau said Ottawa will help the province to recover and prepare for the future effects of climate change.

“We will be here for whatever is needed,” Trudeau told a news conference at the legislature in Victoria.

Horgan said the province has been reeling this year from successive events caused by climate change: first drought, then a heat dome that claimed almost 600 lives, followed by wildfires and now floods.

“It has been a very, very tough year for British Columbians,” he said. “We’re facing the brunt of climate change, not in the future but right now. Our farmers have been flooded. Our roads have been washed away, and our communities are underwater, and more rain is coming.”

The federal government has sent about 500 troops to help with flood recovery and provided funding to First Nations and the Port of Vancouver to help rebuild vital supply chains. Horgan said the port is an important gateway for imports and exports across the country.

Earlier Friday, British Columbia’s transportation minister said crews are working “non-stop” to repair an estimated 200 highway sites that were damaged or destroyed by washouts in the province’s Interior and south coast, but upcoming severe weather could worsen existing flooding or cause more of it.

Rob Fleming said people should prepare for two more storms expected to hit the province on Saturday and Tuesday following a major atmospheric river that devastated some communities where essential supplies are being delivered by air.

“There is an increased risk of landslides that accompanies this weather prediction and power outages are possible from the winds that we’re expecting as well,” Fleming said Friday, adding anyone who doesn’t need to travel should stay home.

The risk of more flooding from the overflowing Nooksack River in Washington is possible on Sunday, he said. In earlier storms, the river flooded the Sumas Prairie area of Abbotsford, where thousands of livestock have died and farms have been inundated with water.

“Information that we’ve received from Whatcom County has indicated that the diking system along the Nooksack does have damage from last week. They’re actively working on repairs to that. We’re obviously watching that very closely.”

Cumulative rainfall expected between Saturday and Wednesday could be greater than the amount that fell during the 2 1/2-day deluge that led to the initial flooding, though it would fall over a longer period of time, Abbotsford Mayor Henry Braun said.

“This is different than it was the first time because now you have water in the lake, the ditches and drainage canals are full and the ground is supersaturated,” Braun told a news conference. “I haven’t talked to anybody yet that actually can determine what will happen. We are all going to watch this together.”

Repairs are complete on the main portion of a dike that burst, causing water to surge into the Sumas Prairie area, he said. The city got additional funding from the province to temporarily increase the height along a seven-kilometre stretch of diking and that work was expected to be completed Friday or Saturday, he said.

Some highways are being closed on Saturday in advance of harsh weather based on forecasting by Environment and Climate Change Canada, the provincial government said.

Armel Castellan, a meteorologist with the agency, said a so-called red level alert has been issued due to expected heavy rainfall starting on the weekend and intensifying on Tuesday.

He said snowmelt could add to flooding as part of a “cascading hazard” after a major atmospheric river dumped record amounts of rain that has already caused major mudslides in parts of B.C.

“These are extraordinary times,” Castellan said.

B.C. Agriculture Minister Lana Popham said she was pleased Trudeau toured the flooded area of Abbotsford on Friday to witness the destruction that has affected the livelihood of farmers.

“I think that his visit will give farmers confidence that the federal government understands the needs that we’ll have and the ask that we’ll be putting forward,” she added.

Trudeau and Braun met with members of rescue operations on Friday afternoon at Abbotsford City Hall, where the prime minister was briefed on the city’s efforts against flooding. He also visited with Canadian Armed Forces members in Clayburn Village who were helping with sandbagging.

Fleming said Highway 3 has been designated for commercial trucks and anyone still returning to their primary residence in the Interior.

“It has played a vital role in the movement of goods and getting our supply chain back up and running,” he said.

The province announced it will close Highway 3 between Hope and Princeton, and Highway 99 between Pemberton and Lillooet, on Saturday afternoon because of the approaching weather. Highway 1 in the Fraser Canyon will also be closed on Saturday.

The government said the exact time and duration of closures will depend on the weather, adding that the highways in those areas are vulnerable after recent storms and are under additional risk because heavy rain is forecast. The closures of the three highways are to be re-evaluated on Sunday morning.

In addition to those closings, Highway 1 between Popkum and Hope will also be closed on Saturday afternoon as BC Hydro conducts reservoir releases to protect the Jones Lake Reservoir.

With files from Camille Bains and Brenna Owen in Vancouver, and Nick Wells in Abbotsford, B.C. 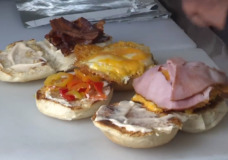 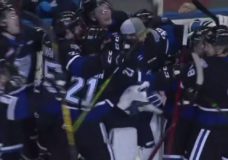