May 9, 2021 updated
CHEK
WatchFire crews responded to the blaze on Eagle Crescent at 6:45 p.m. Friday evening and arrived to find the home fully engulfed in flames.

The sound of blaring sirens filled Gold River on Friday evening as a house on Eagle Crescent went up in flames.

“So I looked out the window and I could see flames shooting out the front window so I came inside and said Oh my God the house is on fire,” said Sunny Tee who lives next door.

“I was just walking up the street to visit my friend and then all of a sudden there was a ton of smoke and there was a huge fire,” added Chad Frame.

Within a few minutes, the Gold River Fire Department was arriving on the scene.

“When we arrived the structure was two-thirds to three-quarters involved in flames already, we saw the smoke from a distance approaching,” said Gold River Fire Chief John McPherson.

One woman was inside the burning home at the time.

A neighbour told CHEK News the woman could have problems with her sense of smell and that a working smoke detector is what alerted her to the fire.

However, McPherson was unable to confirm that for CHEK News by our deadline.

Four family members who lived at the home are now being assisted by emergency social services and are staying at a local hotel.

The fire was so intense that it damaged the siding of one of the neighbouring houses and Sunny Tee who lives on the other side was worried about her cedar shake roof.

“I think we were putting water on our roof for probably about 45 minutes or an hour because every time we stopped it would just start steaming again,” Tee said.

The cause of the fire hasn’t been determined but an investigator from Vancouver is arriving tomorrow.

“We’re containing the scene and from any indication so far, it seems to have been a lower floor, ground floor origin,” said McPherson. “The nature of the source is undetermined at this time.”

“It was super dramatic,” added Tee. “I’ve seen a couple of house fires from a distance before, but I’ve never seen one go this quickly.”

It took over three hours for firefighters to fully extinguish the blaze.

The family does have insurance but the community is raising money and gathering items needed in the interim. Inquiries can be sent to [email protected]

A dramatic house fire in #GoldRiver has destroyed a family home and everything in it. Fortunately, there were no injures. Story @CHEK_News pic.twitter.com/sAtYv1Q5zQ 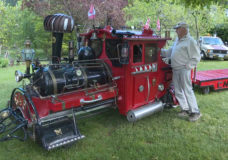 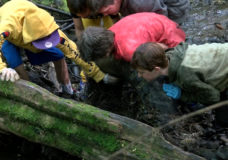