Posted: Nov. 24, 2021 10:52PM
CHEK
WatchIf you've noticed fewer deer roaming around the streets in Oak Bay, it could be because fewer of them are being produced. Tahmina Aziz has more.

If you’ve noticed fewer deer roaming around the streets in Oak Bay, it could be because fewer of them are being produced.

A local research project aimed at controlling the population of deer in Oak Bay appears to be working as the municipality reported a 58 per cent reduction in fawn abundance for 2020.

“If we can bring the population down to even half to what it is now, I think that would be a really big success,” said Jason Fisher, the lead researcher of the Urban Deer Project.

He said there are about 120 deer in Oak Bay, but that number is expected to reduce in the coming years.

His team administered immunocontraceptive vaccines to 60 females in the fall of 2019.

He said the process is humane and virtually painless as they tranquilize the deer then inject them with birth control.

And the results show — it’s working.

“We have shown a significant reduction in the number of fawns in the populations. So, a 60 per cent reduction. That’s big. That’s a big deal,” Fisher said.

While some in the community said they haven’t seen much of a difference, they agree that something must be done to control the population as they worry about the species’ safety.

“I almost nailed one the other day and those that I see out there are limping and have been injured,” said Ron Carter, an Oak Bay resident.

“I’m always afraid when I’m crossing the road that they’re going to get killed,” added Katerina Noest, another resident.

“When you’re driving at night or even during the day, the deers come out and jump in front of you. It’s just bad for the deers,” said Lorraine DeMan.

Fisher said while people do have mixed opinions about the animal, there’s an overwhelming majority that are supportive of the project.

And their work is groundbreaking as urban areas in the United States are watching with interest.

“This really is cutting-edge research. Not many municipalities across North America are doing this,” Fisher said.

Locally, the project expanded earlier this year into Esquimalt and will take several years before the results there are known. 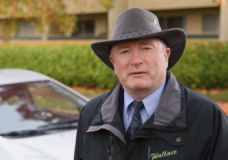 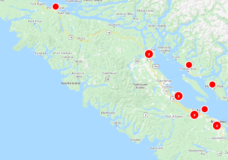