October 21, 2020 updated
Chek
WatchInvestigators with WorkSafe B.C. and Saanich police remain on the scene of a workplace fatality in south Oak Bay this morning. Police say a 27-year old man died while pruning a tree shortly after 8:30 this morning.

Police and WorkSafeBC are investigating after a fatal tree-pruning incident in Oak Bay on Tuesday.

WorkPlace BC, the BC Coroners’ Service and investigators with the Saanich Police Forensic Identification Team are all part of the investigation.

“I can tell you that a young man has lost his life today while just performing his work duties. And that’s really all that I can say at this time,” Oak Bay Police Chief Ray Bernoties said on Tuesday.

“As with any of these incidents that we investigate, the co-workers are traumatized to say the least. This is one of the co-workers that suffered a grievous injury and death. And so we’re mindful of that but they’re co-operating fully with us, and we’ll know more once we can get into the actual scene,” Horsley said.

Heavy branches were snagged in power lines at the scene of the incident, preventing investigators from examining the scene. Neighbours reported hearing a large branch snap.

“What is hampering the investigation at this point is there is a large oak tree that they were in the process of working on. That oak tree is actually hung up on the utility lines, and is still in place,” Horsley said.

A neighbour, Bill Pearce, said he had just hired the company to prune a tree on his property.

“I was appalled to hear that this accident occurred, that it happened. Because I just used them, must be a week ago to perform a service on a large tree that I have in the backyard,” he said.

Victim services are providing assistance to the man’s co-workers, and any neighbours who may have witnessed the incident.

OBPD on scene of a workplace fatality during tree pruning work on McNeill Ave near Byng Street. Detectives and Work Safe attending as it is a workplace accident. Pedestrians and traffic restricted from area at this time. pic.twitter.com/nDABcslogi

McNeil closed at Byng to all traffic including pedestrians. Tragically, it is the scene of a sudden death of young man who was tree cutting. It is not suspicious, however, detectives and forensic ident are also at scene as it is worksafe incident. Please avoid the area. pic.twitter.com/G52KNGsBqG 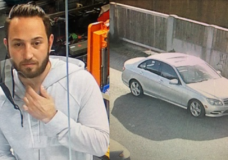