‘Not like seeing Santa in the mall’: Santa’s Ship returns to Mayne Island

After a four-year hiatus because of COVID and bad weather, Santa Claus finally returned to Mayne Island on ‘Santa’s Ship’ Saturday.

“I love it, I was doing this when I was a little kid,” he said. “My son who is in his 30s now was down here, a babe in arms, same thing and I remember, this is like a four-generation event.”

It’s a tradition that dates back to 1951, started by the Bellingham Jaycees to get toys to children in more remote areas of the Washington and B.C. coast.

“On December 23, 1951, children in the San Juan Islands, who have little opportunity to meet Santa and give him their gift lists or even to see Christmas lights, are visited by a Christmas Ship from Bellingham, bearing a huge, festive, colorfully lighted tree and bringing Santa himself with gifts of candy. That visit inaugurates an annual island tradition,” states and article on historylink.org.

“One American ship on a one-day excursion will become some years two ships — Canadian (Santa Ship) and American (Christmas Ship) — each on two-day, cross-border trips as the number of visits expands to more islands in the San Juans and in Canada’s Gulf Islands.”

It eventually became a one-ship delivery of presents to children on both sides of the border.

The endeavour was eventually taken over by the Bellingham Lions Club and Saturna Island, Pender Island, Galiano Island and Mayne Island all received visits.

The last four years were cancelled because of COVID or bad weather and this year the ship did not come to Canada so the Lions Club of Mayne Island decided to take over the reins.

“It got really complicated for the Bellingham people and it’s a huge project and the border was getting more complicated,” said Brian Dearden, chair of the Mayne Island Lions Club. “Was that COVID or NEXUS or Homeland or whoever, bottom line is there was a lot of logistics behind this so I think they basically said no we’re not going to do that anymore.”

So on Saturday Santa arrived in Miners Bay on a local boat and with the help of locals he was pulled in his mock sled, a fire truck, to the local hall where he met about 100 children to deliver gifts.

“It’s not like going to see Santa in the mall,” said Dearden. “This is kind of fun. And it’s interesting seeing some of the older kids, they want to believe in this guy and it’s a chance for them to get back to their childhood and see everybody smiling.”

A grant from the CRD and money from the Lions Club totalled about $2,500 for gifts.

Organizers hope to include the other islands again as early as next year. 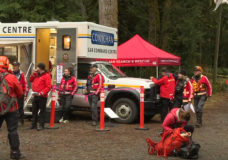 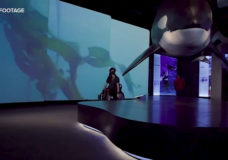 Royal BC Museum to send Orcas Exhibit on the road