March 19, 2020 updated
CHEK
Watch$82 billion sounds like a lot to inject into the economy and for Canadians but is it enough? Renters are calling for relief.

For many, the $82 billion aid announcement coming from the federal government as a response to COVID-19, offered peace of mind.

Among the list is liquidity to the banking sector to be able to defer mortgage payments from homeowners.

“This will take a lot of stress off,” said Victoria Mayor Lisa Helps.

“I think it’ll have a trickle-down effect as well.”

But many renters in the region, say there’s no relief.

“They are essentially not providing any support,” said Angela Whatley talking about the property managers running Lakepoint in Langford.

“They are not deferring rental payments, nothing of a sort. I am shocked and disgusted. This is a time where we should be coming together, supporting one another, and showing some compassion. There has been absolutely none of that.”

And Whatley is one of many in the region.

Over 60 per cent of households in the City of Victoria rent.

That’s tens of thousands here, millions of renters across British Columbia and Canada.

And while mortgage payments have been postponed, rent has not.

“I’m extremely concerned that people losing their incomes will also lose their homes,” said Emily Rogers, a legal advocate with Together Against Poverty Society.

“We need immediate action to make sure this does not happen.”

The government says they’re working on it.

“Government is seized with that issue, work is being done in that area,” said Mike Farnworth, solicitor general for the province, after announcing a provincial state of emergency Wednesday.

“I’ve been in close touch with Minister Robinson (Minister of Municipal Affairs and Housing),” said Helps.

“I know that she and her team are working very carefully on this. What we are hoping for is a moratorium on evictions and some supports for renters as we saw the federal government put forward for homeowners.”

Meanwhile, it seems like the pandemic hasn’t affected the local housing market.

“The biggest surprise right now is, in the midst of everything that’s going on right now, we’re still getting requests for viewing,” said Tony Joe, a realtor with Remax Camosun.

“People are wanting to have a look at houses, we’re continuing to get offers as well too so there’s people buying!”

Meanwhile, local mortgage brokers say they’ve been inundated with calls and emails from clients to see if they qualify for help.

They’re expecting the big six banks, including TD, Scotiabank, and CIBC, etc. to likely put the mortgage deferments in place.

And if one lender goes, mortgage brokers say, it’s likely others will follow.

Meanwhile the feds are assuring they still have more firepower to keep a roof over all Canadians during these unprecedented times. 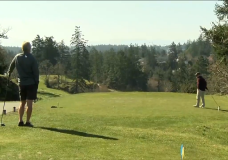