A mother is seen gently fondling her baby in some new footage of southern and northern resident killer whales taken with drones and sonar.

The new footage is offering a new glimpse into the lives of resident killer whales.

It is a revelation to researchers who study orcas.

Dr. Andrew Trites, who oversees the Marine Mammal Research Unit and a research program at the University of British Columbia that involves captive and field studies of seals, sea lions, whales, and dolphins, says he was really surprised by what researchers saw.

“I’m used to seeing whales from a boat looking across the water at them,” Trites said.

A group of B.C.researchers gathered the treasure trove of video and data during a summer trip on the Salish Sea. Their goal was to explore any connection between the availability of chinook salmon and the struggles of the southern resident killer whales.

From above, scientists could see the orcas in constant contact with each other, like a ballet, confirming that social bonds between the orcas are as important as it is with humans.

“I had not appreciated, until that moment, looking at the footage just how tactile they are. And think about why that should be, I thought about well, we as humans we hug our children, we hug our partners, our husbands and wives, and our friends,” Trites said.

The drones allowed them to be the so-called “flies-on-the-wall”, and see intimate moments, like the baby southern resident orca J-56 holding a fish between her teeth for two days — like a soother or teething ring.

With 73 adults and two babies, the southern residents are struggling. But the video leaves scientists with hope for the future.

“We got to see them catching chinook, chasing chinook, breaching, spy-hopping. Doing all the things that you expect healthy, happy whales to be doing.  And it was very encouraging,” Trites said.

Trites says he hopes to be able to release some of the results of their research in the spring. 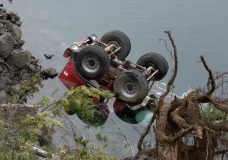 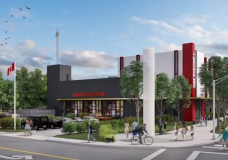