New Emily Carr exhibit opens at the Royal BC Museum

CHEK News
Two of Emily Carr's pieces. The one on the left was painted before she went to France and the one on the right after she came back to B.C.

Several works by iconic Canadian artist and Victoria native Emily Carr are part of a new exhibit at the Royal BC Museum.

“We’re so fortunate to be able to show the greatest works of arts  produced by Emily Carr from a particular period from the time she goes to France and she drinks in French culture, she drinks in her teachers and she produces a completely new type of work, responding emotionally to what she sees,” Jack Lohman, Royal BC Museum CEO, said

The exhibit explores Carr’s time in France, starting in 1911, and her return to British Columbia 16 months later.

There are 67 different works by Carr and her colleagues as part of the exhibit. There’s also a micro exhibit with 22 smaller works by Carr, including sketches, postcards and small watercolours.

“This is probably the biggest show we’ve put on,” Lohman said, adding its done in partnership with the Audain Art Museum in Whistler, B.C.

Kiriko Watanabe, the Gail & Stephen A. Jarislowsky Curator, at the Audain Art Museum, said one of the purposes of the exhibit is to show Carr’s transformation as an artist from before she went to France and after.

The exhibit is divided into two sections. One of the sections is the works she created in France.

The other section includes watercolour pieces Carr did before she went to France, using watercolours, in 1908 and 1909. It also includes oil-on-canvas works Carr painted when she came back from France.

“She came back extremely excited, passionate about her work, and she wanted to use the subject matters of her own country. So she’s applying the techniques, colour palates, brush strokes that she learned in France.”

To buy tickets to the exhibit, visit the Royal BC Museum site.

Some of the pieces in the Emily Carr: Fresh Seeing – French Modernism and the West Coast exhibit at the Royal BC Museum. 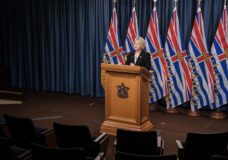 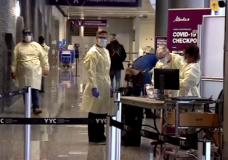