With a blast of nearly 30 centimetres in parts, it was a quieter day than normal on the roads in Nanaimo as the city and its residents dug out from the heavy blanket of snow.

There was a big push Tuesday morning to clear the parking lots and sidewalks at Country Club Centre before it opened for the day.

With extended hours and some busy days of shopping expected this week even the mall’s general manager and family were clearing snow as a deluge of shoppers were expected to arrive.

“It’s all hands on deck this morning,” said Dave Mills. “(I’m) just organizing everybody, making sure everybody’s going in the right direction. Get all the doors open first and then a little more clean up after that.”

The snow stopped falling in Nanaimo at six o’clock this morning leaving the city a winter wonderland.

“Coming to town it’s a surprise to see 10 inches in town, yeah, for sure,” said George Ewing.

The sound of shovelling or snow blowers pierced the quiet while people dug out not just their own properties, but neighbours’ as well.

“It’s fine for us. We’re self-employed so we can take our time and help our neighbours out,” said Kenwood Agar, a Nanaimo resident.

“We decided this morning we’d just keep going and try and get the neighbour’s sidewalks as well. Just to get the Christmas spirit here,” said Travis Barbour, a pastor with Neighbourhood Church Nanaimo.

The city says it cleared priority routes and was able to move into secondary roads early in the day.

“One of the challenges we are running into as we’re moving into the residential neighbourhoods is the prevalence of cars parked on the side of the road and that doesn’t leave our plows a whole lot of room,” said David Thompson, the City of Nanaimo’s manager of roads and traffic services.

Thompson says Tuesday night’s snowfall was the largest of the season. In late November, Nanaimo got close to 10 centimetres.

“If residents could move their vehicles off the road into the driveway, that would certainly help our crews be much more effective,” he said.

A three-vehicle crash on Terminal North was one of just a few collisions around the city Tuesday.

At Vancouver Island University, scheduled finals were postponed. School kids already off on their Christmas break took to the local hills.

“It’s amazing. This is what childhood is made of. I grew up in the north so when it snows we just love it,” said Sean Walsh, a father sledding with his children.

The City of Nanaimo has announced it will turn on lights at Harewood Centennial Park, Mansfield Park and Pleasant Valley Park for those who want to go sledding until 9 p.m. Monday evening. 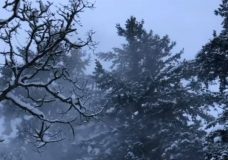 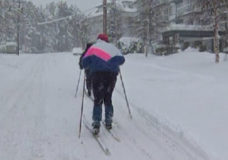 How does Victoria's overnight snowfall compare to the Blizzard of '96?