WATCH: A Nanaimo senior says it’s a miracle she’s still alive. The 72-year-old fell from her bicycle before a car crushed her. Tonight, she’s recovering after some Good Samaritans came to her rescue. Kendall Hanson brings you her story.

Claire Surgenor is not walking as nimbly as she used to but you would be hard-pressed to guess she was nearly crushed to death just over a week ago.

She was saved thanks to a number of people who responded quickly to the terrifying situation.

“It’s a miracle that my whole chest didn’t get caved in,” said Surgenor.

On June 9th Surgenor was cycling from Rutherford Road onto the sidewalk when she lost her balance and fell over.

She soon realized a car driving out of the parking lot was coming towards her.

“I sat up and was going to get up. I turned around. This car was coming at me. He rammed at me. I was pinned underneath and I couldn’t breathe,” said Surgenor. “I could see his back tires coming at me and I thought he’s going to finish me off and then I passed out.”

Bill Clay heard yelling and ran out of his bakery to see what was going on.

“I saw two feet sticking out from under the car so I ran over to the front of the car and looked down underneath saw the woman,” recalled Clay. “Her pupils were dilated and she was just staring straight ahead so I knew I had to get the car off of her as fast as possible.”

Someone who saw what happened alerted the driver to stop. An off-shift nurse came to Surgenor’s side.

Clay tried to use a car jack but soon realized that wouldn’t be quick enough.

Two police officers, who just happened to be driving by, along with five Good Samaritans lifted the 1,500-kilogram car.

“We all just grabbed the car and lifted it,” said Clay. The nurse pulled her away from the car, which was now being held up on two wheels.

“Within about 20 seconds she took a breath and started breathing again,” added Clay

“Unbelievable, unbelievable and then you realize I had no pulse and that it was critical and they were faced with saving my life and that’s what they did,” said Surgenor.

Surgernor has been released from the hospital. She has a punctured lung, cracked rib and contusion to her liver but she’s expected to fully recover.

“Bad things will happen to you in life but I think you can stand up thanks to a whole community, friends and loving people and you have to believe in yourself and be grateful,” she said.

Surgernor says she’s now going to give up cycling for safer activities.

She is truly thankful to all the people who helped her live to see another day. 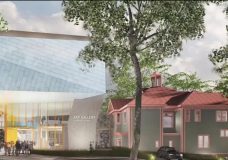 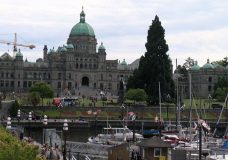