Looking out from his downtown Nanaimo barbershop Wednesday, Dave Lawrence saw the need for the backpacks and back-to-school supplies that he collects for low-income families up close as Kevin Dodds’ young twins waited for the bus on a nearby sidewalk.

“Because if they didn’t have this stuff, twins like mine wouldn’t be able to have the school supplies to go back to school,” said Dodds, a Nanaimo resident.

So when a handwritten letter and donation arrived in the mail Wednesday it left Lawrence speechless.

“There’s this lovely letter by Margaret and a $500 cheque that she wrote for Fresh Start,” said Lawrence.

It reads: “I am sending a donation to help. I would like you to get boots and shoes for the school children. I am 97 and seldom had the excitement of new shoes during the depression.”

“So I will go and buy a lot of boots and shoes on Margaret’s behalf,” said Lawrence.

The letter writer is Margaret Sandeman-Allen, who Wednesday CHEK News found knitting hats to be given to newborns at the Nanaimo hospital.

“You realize what an impact that might have on a child?” CHEK News asked Sandeman-Allen.

“Well yes because I think I was that child at one time,” she replied.

Even nearing 100-years-old, her memories of a childhood with a house full of love but little money, bring a smile to her face. The Nanaimo resident said she will never forget the struggle of poverty in the Great Depression.

“And my mother used to go around and get second hand shoes for me because money was scarce and my greatest joy was to get a new pair of shoes,” said Sandeman-Allen.

With the growing donations for Fresh Start, Nanaimo’s kids in need will get new shoes now, in addition to fresh haircuts, backbacks and supplies for their first day of school.

“It’s such a great feeling to see the community come together and support kids,” said Lawrence.

Donations are now being accepted at That 50’s Barbershop on Nanaimo’s Victoria Crescent until Sept. 4, when as many as 100 families are expected to line up for the supplies.

“There’s a lot of children in poverty in Nanaimo and they need all this,” said Dodds.

Sandeman-Allen said she is glad to have a hand in helping and knows some child will feel the joy she did, opening something new, and meant just for them. 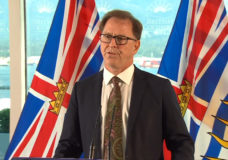 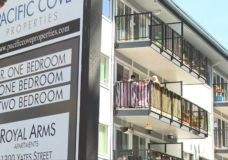