April 21, 2020 updated
James Sijpheer / YouTube
The principal of Nanaimo Christian School has delivered a gift to students by singing a rendition of Disney's The Little Mermaid.

If you’re an educator, principal or part of any school faculty on Vancouver Island, it is time to take note as a new bar has just been set when it comes to connecting with students through video conferencing platforms.

The principal of Nanaimo Christian School, James Sijpheer, has delivered a gift to students at his school through an original rendition of “Part of Your World” from Disney’s The Little Mermaid.

Much like the Disney classic song that features a mermaid, Ariel, singing about longing to live with humans on land, Sijpheer’s version – dubbed ‘Back in the School’ – boasts lyrics about longing to be back learning with students.

“I want to be where the students are. I want to want to see them learning. Sitting around in those…what do you call them? Oh seats,” Sijpheer sings as video clips show empty classrooms and hallways around Nanaimo Christian School (NCS).

Now it is not every day that students get a chance to hear their principal sing, however, during these unprecedented times educators and school faculty are having to find creative ways to connect with students over digital mediums.

For Sijpheer, his Ariel-calibre performance was part of a greater series of weekly video challenges that he has been issuing to NCS students.

“Being the Principal, I don’t have my own class that I get to connect with every day, and I was struggling with how to stay in contact with the students and our community.  My highlight every day is greeting the students in the morning and I was really missing them and thought a weekly challenge would still allow us to be connected in a fun way,” Sijpheer told CHEK News.

These challenges to students have involved things like making pancake art or showing off an isolation fitness routine. Although the NCS principal has been coming up with several of his own ideas, the idea for the musical performance, however, came from staff at his school.

“I was tagged in a Facebook post by several of our teachers where a Principal in the US sang a song and they asked when my song was coming out. Not being one to back away from a challenge, I foolishly accepted.”

As it turns out, this isn’t the first time Sijpheer has publically performed a Disney rendition, however, he said singing is simply a hobby and he makes it sound like we shouldn’t expect to see him competing on American Idol like fellow Nanaimo resident, Lauren Spencer-Smith.

“I once sang a duet of ‘A Whole New World’ as a way to introduce the Grad Speaker at our grade 12 graduation ceremony last year, but as you heard, singing is something I should probably do less of,” Sijpheer joked.

The video was posted on YouTube on Sunday, April 19, and, according to Sijpheer, it has passed the initial reviews of the Island’s toughest critics.

“So far, there have been lots of positive comments with some well deserved mocking on the side.  My own kids and my family in Alberta have not seen the video yet, so I expect the mocking to increase.  We have such a great school community and the support from our parents has been so overwhelming as we figure this out altogether.”

With positive comments and reactions so far, Sijpheer is feeling that his video is serving the right purpose.

“We will all get through this but doing it together, in community, is going to help us get it through it easier,” the NCS principal said.

“There are a lot of Principals and Teachers who have had to figure out YouTube and lots of really great poems, songs and messages being posted. My hope is that this video, can join all of the others (most of them better than mine) and provide a smile, some joy, and a distraction from all the other news that can cause us to worry or be fearful.”

Sijpheer’s video isn’t the first that has surfaced on Vancouver Island of teacher’s having fun with video conferencing during the COVID-19 pandemic. Last month, the staff at Esquimalt High performed a costume-filled dance routine, however, there is something to be said about a solo act.

With the video posted and the challenge issued, it is now time to sit and wait for the response videos to be posted. 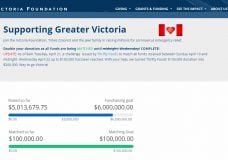