Homeless who had been camping on Wesley Street in Nanaimo, until a fire last week, claim they’re now constantly being harassed.

They say they were displaced unfairly without all their belongings and now they have no place to live with dignity.

Renee Mayers was among those who were camping on Wesley Street until they were displaced last week. She says she lost her tent, she personally bought and her sense of safety.

“Why is it okay that the police and the city can just come in and clean sweep it all and say that we are the disorder? That’s wrong in every way.”

Mayers was among close to two dozen people who marched to Nanaimo city hall Tuesday calling for social housing.

“We really encourage the citizens of Nanaimo to understand that these are human beings and they deserve love and dignity and respect,” said Ajay Booth, a homeless advocate.

A fire broke out destroying several tents and causing some gas tanks to explode.

The City of Nanaimo says it moved in based on a fire safety order that wasn’t being followed and ordered everyone to move along.

“In terms of the response, the police conducted a very orderly and very sensitive depopulation, if you will, of the site. They ensured everyone had an opportunity to go back to their tents and made sure they were the people associated with those tents to ensure there wasn’t theft,” said Nanaimo Mayor, Leonard Krog.

Since then the homeless have scattered through the city.

A number of them started camping behind the curling rink but a large police presence moved them along. They moved across the street to this shelter at Bowen Park.

“I understand that these people need somewhere to live but I don’t believe it should be in our public parks,” said Amber Harris, a Nanaimo resident.

Nanaimo’s mayor says while the homeless are allowed to camp in some parks overnight the city also doesn’t want to see another dangerous living situation start up again.

However, Krog said he is hopeful for the future with local MLA Sheila Malcolmson being recently named as B.C.’s mental health and addictions minister.

“I wish her well but her feet are going to be held to the fire by me, by our council and many other mayors across this province who have neither the resources, jurisdiction or legal responsibility to deal with these issues,” said Krog. 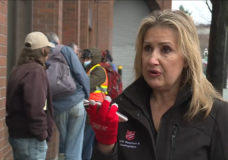 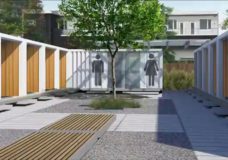