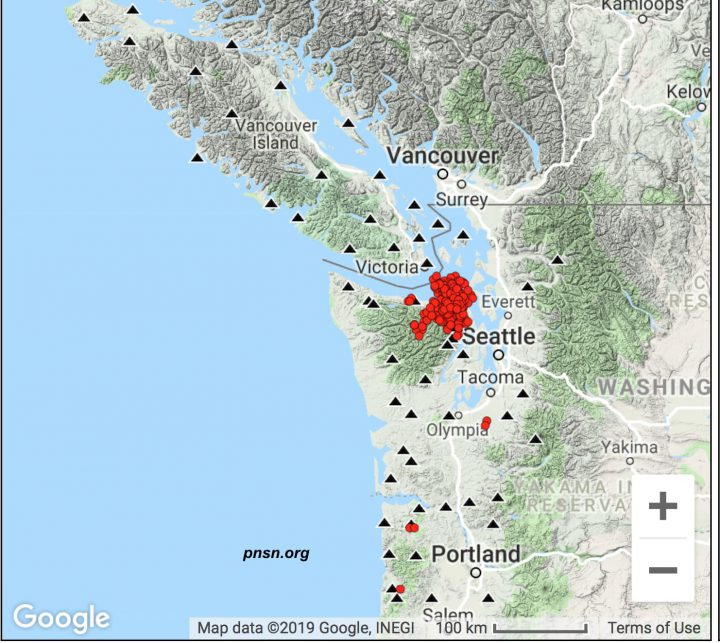 John Cassidy said there were more than 200 tiny tremors between Victoria and Seattle between March 11, 2019, and March 12, 2019. (John Cassidy/Twitter)

A seismologist says Vancouver Island may be on the verge of a seismic event after more than 200 tremors were noted in a 24-hour period between Monday and Tuesday.

John Cassidy, earthquake seismologist for Natural Resources Canada, posted on Tuesday there were 242 tremors in that period.

None of the tremors have been felt on the surface but Cassidy said the burst could be the start of episodic tremor and slip (ETS).

ETS is a process that occurs deep below the Earth’s surface along faults that form the boundaries of tectonic plates. It involves repeated episodes of slow fault slip of a few centimetres over a period of several weeks, accompanied by seismic tremors.

The tremors appear on seismic records as prolonged, intermittent ground vibrations, similar to those caused by windstorms. They differ from earthquakes which generate large, sharp, shock waves that subside very quickly.

Slow slip events (or “silent” earthquakes”) have been affecting southern British Columbia and northern Washington have been occurring every 14 months or so since at least the 1990s, according to the Pacific Northwest Seismic Network.

The roughly two-week long events happen when seismic stress shift onto the fault area where the Juan de Fuca and North American plates lock together. It causes thousands of mini-tremors and can heighten the likelihood of a major earthquake event in B.C.

Good question. It would be early – but this may be just a small burst of tremors… we will have to see if this continues for several days, shows movement along the margin, and is also associated with GPS movement – then it would be an early ETS. 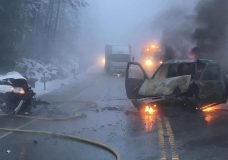 Driver in Port Alberni head-on crash says other victim was saved with seconds to spare. 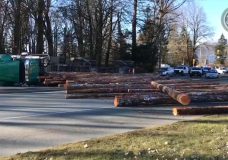