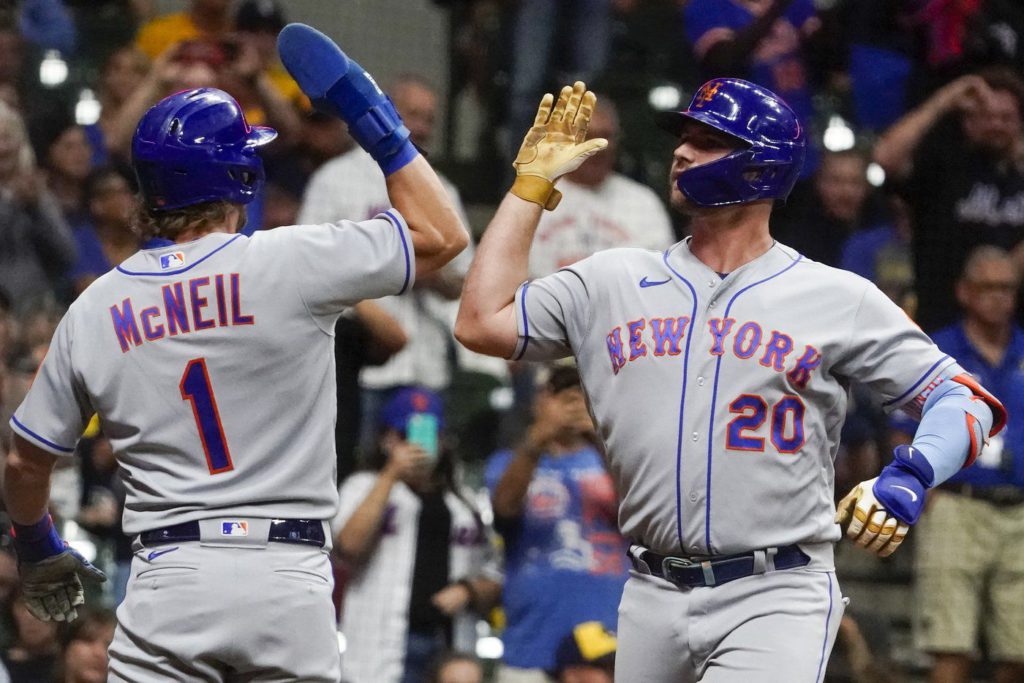 CHEK
New York Mets' Pete Alonso is congratulated by Jeff McNeil after hitting a three-run home run during the fourth inning of a baseball game against the Milwaukee Brewers Monday, Sept. 19, 2022, in Milwaukee. (AP Photo/Morry Gash)

The Mets are on track to have baseball’s highest payroll for the first time since 1989, among a record-tying six teams set to pay a penalty for spending.

The Los Angeles Dodgers, who started the season as the top spender, fell into second due to Trevor Bauer’s suspension.

New York entered the last full month of the season with a $273.9 million payroll, according to updated figures through Aug. 31 compiled by Major League Baseball. The Dodgers are second at $267.2 million, followed by the New York Yankees at $254.4 million.

The Mets hope to win their first World Series title since 1986.

“I have expectations of the Mets being the last team standing. What else is there? I mean, that’s why we get up in the morning every day,” Mets manager Buck Showalter said Sunday. “It’s kind of cold. It’s kind of cruel, but I’d rather know it up front what the end game’s supposed to be. Some people go through their whole life not knowing exactly what success is supposed to be. Nobody’s got to in here tell me how we’re doing. There is a scoreboard and standings. It’s right there. You don’t like it, play better.”

Mets pitcher Max Scherzer, at a big league-high $43.3 million, makes roughly $5 million less than Oakland’s entire team and combines with teammates Jacob deGrom and Francisco Lindor for about $103 million — more than eight of the 30 clubs.

When the Mets last topped MLB in payroll, their total was $21.3 million.

The Dodgers‘ payroll dropped when Bauer was suspended for two years without pay on April 29 for violating the sport’s domestic violence policy. Bauer’s 2022 salary was $32 million but was reduced to what he was owed at the time of the suspension: $3.8 million. He is challenging the discipline before an arbitrator.

The Mets‘ payroll has risen steadily since Steven Cohen bought the team from the Wilpon and Katz families after the 2020 season. The Mets‘ spending rose from $146 million in 2019 to $199 million last year, the first season after the pandemic, and negotiators said last March a new tax threshold was aimed at him. Cohen then quipped: “It’s better than a bridge being named after you.”

For purposes of the luxury tax, which uses average annual values for players on 40-man rosters, the Mets are on track to set a record at $298.8 million and eclipse the 2015 Dodgers’ $297.9 million. Luxury tax payrolls include just over $16 million per team for benefits and $1.67 million for each club’s share of the new $50 million pool for pre-arbitration players.

The Mets are in line for a tax of $29.9 million, Midseason trades boosted their tax payroll from an opening-day projection of $289.3 million and past the new $290 million threshold in the March agreement that ended a 99-day lockout.

The Dodgers opened this season with a $310 million tax payroll, on track to pay a record penalty of $47 million. Their tax payroll dropped to $289.96 million by Aug. 31, leaving them just under the Cohen Tax. With higher tax rates as a repeat offender, the Dodgers are on track to pay $29.4 million. 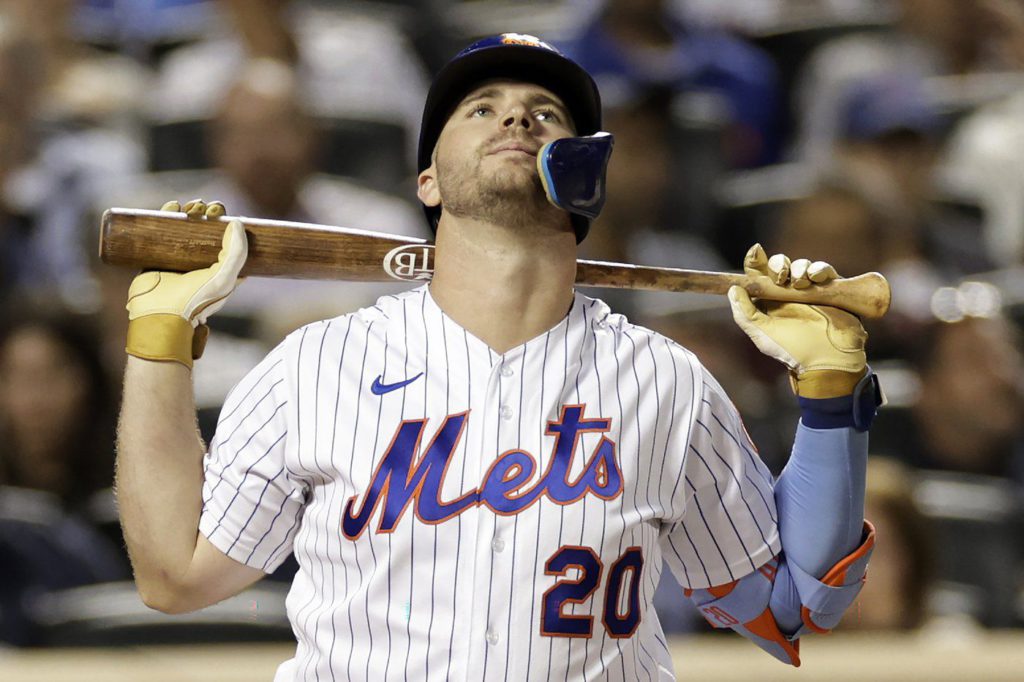 New York Mets’ Pete Alonso reacts to striking out during the fourth inning of the team’s baseball game against the Chicago Cubs on Wednesday, Sept. 14, 2022, in New York. The Mets‘ payroll has risen steadily since Steven Cohen bought the team from the Wilpon and Katz families after the 2020 season. (AP Photo/Adam Hunger)

First-time offenders pay 20% on the amount above the first threshold, 32% above the second, 62.5% above the third and 80% above the fourth.

The Yankees have paid $348 million in tax since the penalties began in 2003, followed by the Dodgers‘ $182 million.

Only once before have six teams paid tax, with the Dodgers and Yankees joined in 2016 by the Red Sox, Chicago Cubs, Detroit and San Francisco for a total of $74 million.

Oakland has the lowest regular payroll at $49 million and lowest tax payroll at $65 million. 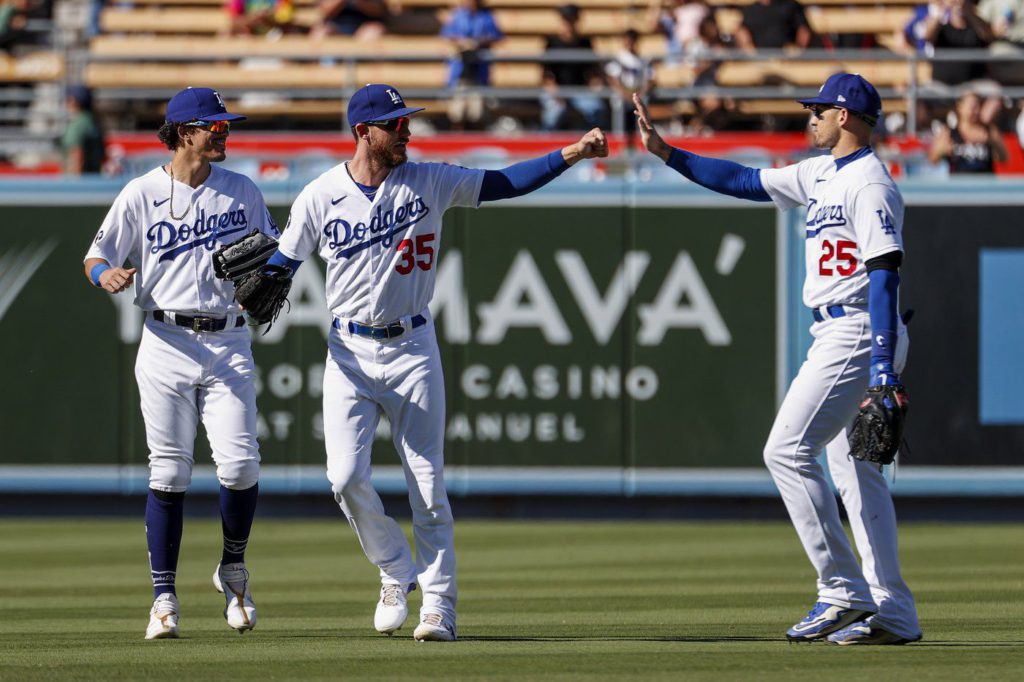 Los Angeles Dodgers Cody Bellinger (35) celebrates with Trayce Thompson (25) and Miguel Vargas after the Dodgers defeated the Arizona Diamondbacks in a baseball game Tuesday, Sept 20, 2022, in Los Angeles. Los Angeles led the league in payroll in both 2020 and 2021. (AP Photo/Ringo H.W. Chiu) 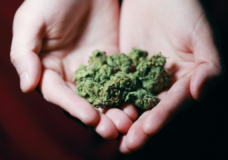 How is cannabis legalization going? Feds launch overdue review to find out 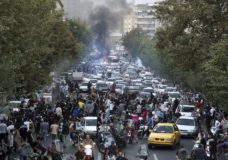 At least 9 killed as Iran protests over woman's death spread