A Metchosin man is overcoming obstacles every day in order to ride his bike alongside his grandson. In the process, he’s raising money and awareness for Parkinson’s disease. Tyler Bennett has more.

Metchosin resident Alf Todd has been athletic and energetic his entire life. In 2007, Alf was diagnosed with Parkinson’s disease.
“I was suspicious of it being Parkinson’s,” Alf says,  “I knew something was wrong, my feet were starting to drag, my body was very stiff, rigid, but it answered a lot of questions for me, it gave me some relief just knowing what was going on. But life goes on, and we can take lemons and make lemonade out of it.”

From there on, Alf, with the help of his daughter Cindy took action, and created Parky’s Peddlers, a ride from Victoria to San Francisco to raise funds and awareness for Parkinson’s disease.

“I have two brothers and when we were kids we all did this ride with him to San Francisco,” Cindy says,  “and he’s always said he’s wanted to do it one more time, and as his health was deteriorating, my brothers and I thought let’s do it with Dad one more time before he can’t, and then the idea kind of progressed that if we’re going to do it, why don’t we turn it into a fundraiser and why don’t we try and get more people, and to be part of something so big, when someone you love is going through something like Parkinson’s, or anything, you feel helpless and this is my way of feeling like I’m doing something to help.”

“after she left the room, I just looked at the computer screen and started crying,” Alf says, trying to hold back his emotions,  “it was such an honor that this was being done on my behalf, and from my own daughter.”

Alf’s upcoming ride will be from Victoria to Port Hardy, alongside his 11 year old grandson Brett.

“I like to ride,” Brett says,  “and it’s gunna be really fun and challenges, and I know it makes Papa proud when I ride with him.”

While he’s doing all he can to help raise money and awareness, Alf says without the support of his family, none of this would be possible.

“he would do anything for anyone else,” Cindy says,  “so we have to step up and do what we can to help him.”

“I just really appreciate everybody that has stood behind us,” Alf says,  “as far as the support from my family and my wife, I can’t say enough, it just means so much to me how much they’re behind me.”

Alf and Brett kick off their ride on June 12th. 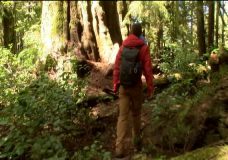