Melissa McDevitt’s father joins search as concern grows over missing hiker: ‘The worst could be unbearable’

Posted: Dec. 13, 2022 6:20PM | Last Updated: Dec. 15, 2022 11:37AM
CHEK
WatchMelissa McDevitt's father has arrived from North Carolina to help search for his daughter who has been missing since Friday. April Lawrence reports.

The father of Melissa McDevitt, whose disappearance prompted a wide-scale search in the Sooke region over the weekend, tried to remain optimistic Tuesday even as he acknowledged the possibility he may never see his daughter again.

Tom McDevitt flew in from North Carolina Monday night to join more than 30 search and rescue crew members looking for his 39-year-old daughter, who has a rare genetic condition and is considered “high-risk” due to the circumstances surrounding her disappearance.

Family members were first aware something was wrong when Melissa missed a Saturday flight from Vancouver to North Carolina to visit them. They later learned she didn’t even show up at the ferry she would have had to take to catch the flight and eventually found her vehicle abandoned in a parking lot near the Sooke Potholes.

“I talk to her every evening just to see what she had done and when I called her about 10 o’clock (EST) on Friday night it rang a couple times and then went to voicemail,” said Tom.

He called back several more times, with the calls eventually going straight to voicemail, and at 5 a.m. local time, he called Melissa’s strata to have them check her unit. The door was unlocked and the person on the other end of the phone found her passport and her bag packed, ready to come home.

“This is totally out of character and I didn’t want to waste any time,” said Tom, so he filed a missing persons report with Victoria Police that morning and told them specifically to search the Sooke area as he knew his daughter had been hiking there every day that week. Hours later her car was found in the parking lot near Charters River on Sooke River Road.

He’s now come to Vancouver Island to help find his daughter, who he says is an avid hiker familiar with the area, but whose rare genetic condition called triple X syndrome impacts her social interactions and makes her prone to riskier behaviours, like frequently hiking alone.

Friends told CHEK News Tuesday Melissa is confident in her hiking abilities and would have been prepared with snacks and water, which means her sudden disappearance is all the more concerning.

“It’s a cliche, but you hope for the best but prepare for the worst and the worst could be unbearable,” said Tom, becoming emotional.

“If this ends up having an unpleasant outcome, I’ve made a commitment if they have to bring Melissa out, I want her to be brought out and know her father was here, so that’s where I’m at.”

But Melissa’s father, friends and search and rescue crews aren’t giving up hope, scouring the rugged terrain where she was last seen.

“We’re certainly concerned about Melissa, the temperatures are cool, and she’s not well prepared but everything we’ve learned about Melissa, she’s very determined and searchers are very positive and working hard to locate her in good condition,” said Paul Berry, President of Comox Valley Search and Rescue.

“Today the focus has been on the ground, yesterday certainly motorized vehicles and helicopters were involved, today ground searchers are covering areas close to the last known point for Melissa both in grid search and corridor searches, so searching on either side of the trails that exist within the area.”

Police say they have no evidence to suggest Melissa is anywhere but the Sooke Potholes area and her father plans to help search it every day for the rest of the week.

“As a parent, you’ve got to be doing something. You can’t just say I didn’t do anything. If I’m doing nothing but showing support for the volunteers and searchers, I’ll feel I made a difference.”

RCMP and search officials say they continue to have hope that McDevitt is making good decisions and is able to look after herself, wherever she is, until they get to her.

They’ll be back out trying to do just that Wednesday morning. 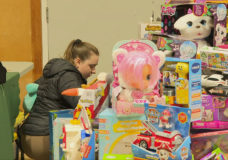 'It means a lot': Families in need excited to shop for toys collected during the CHEK Christmas Drive Thru 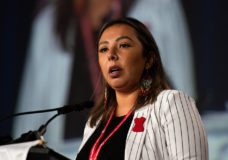