June 30, 2020 updated
Skye Ryan
A mechanical failure resulted in BC Ferries' Coastal Renaissance being stranded for hours off the coast of Nanaimo on Sunday night.

It was an eventful Sunday for passengers, staff and crew of the BC Ferries as a mechanical failure resulted in the Coastal Renaissance being stranded for hours off the coast of Nanaimo yesterday night.

The vessel was left to drift until the anchors were dropped near Jack Point.

“It went quiet and then after a few minutes they said that there had been loss of power and they were looking into it,” said Jason Cleghorn, a passenger from Surrey.

“Everything turned off and we started drifting and we heard the sound of the anchors which is a very very loud sound. I don’t think I’ve heard anything that loud before,” said Matt Prunty, another passenger.

The nearly 570 passengers were told the sudden power loss was caused by a problem with a fused breaker. Members of the ferry’s crew attempted repairs on board.

It was several hours later, after the anchors dropped, that tugboats came to rescue the stranded Coastal Renaissance.

Some passengers who were tweeting from onboard posted videos of the two tugboats assisting the vessel, which had arrived on-scene shortly after midnight.

“It takes a lot of coordination with the tugs to get a vessel like a ferry, in this case, the Coastal Renaissance into
Duke Point, so there are a number of safety procedures that have to take place and those were done to ensure not only the crew but the passengers and sometimes those things do take a bit of time,” said Astrid Chang, a BC Ferries spokesperson.

The tugboats were able to bring the ferry back to port and by 2 a.m., passengers finally began disembarking.

“It was just the duration of it that was long. By the time we got off the boat it was 2 am and then we had an hour wait in line for the refund,” said Prunty.

By the time he returned to a family member’s home and got to bed it was 4 am.

In an e-mail to CHEK News, BC Ferries’ Public Affairs Executive Director, Deborah Marshall, said that the mechanical failure was a result of an “electrical issue.”

She said that customers who were stuck onboard the Coastal Renaissance were given complimentary food and beverages while the tugboat assistance was in progress and that customers were offered refunds.

“Mechanical issues happen from time to time. Our crews are highly trained to handle these situations. I want to thank our crews for the way they managed this evolving situation,” added Marshall.

Repair crews worked overnight to address the electrical issue in time for the ferry’s first sailing on Monday morning.

The duration of the incident that resulted from the mechanical failure lasted for over five hours.

Several customers who were stranded or stuck at Duke Point terminal took to social media to show their frustrations with the process.

Earlier in the day, BC Ferries also experienced delays as a result of two ships being called to assist in a marine rescue.

The Queen of Oak Bay and the Queen of Cowichan were both called in to assist in the rescue of three people from a capsized pleasure craft around 4 p.m. while making their respective trips between Horseshoe Bay and Nanaimo.

A Coast Guard boat eventually reached the vessel, and those on board were transferred to Nanaimo to be checked out.

@BCFerries 20:15 duke point to tsawassen engine breaker failure with no compensation or no helpful staff updates. hassle for 570 passengers. cool, man. captain just announced: “it is what it is” — thanks for nothing. @GlobalBC @CTVVancouver

@BCFerries terrible service at Duke Point. Ferry breaks down at 7 pm at 10:44 pm they decide we are not making it across and we have to pay for our own accommodations. #terribleservice 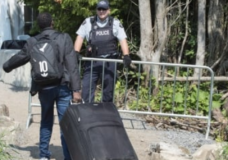 Asylum seekers who tried to cross from U.S. last month turned back 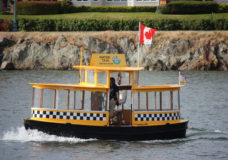