Posted: Jul. 28, 2020 6:26PM
CHEK
WatchThe Ralmax Group says their massive project shows what the region is able to accomplish, and hopes it continues to push for the protection of industrial land.

In the Point Hope Shipyard, the Ralmax Group’s stacker-reclaimer project, which towers above Victoria’s Upper Harbour, will soon be sent to North Vancouver.

The group says project was only possible as the yard has low access to water, and easy availability of manufacturing facilities nearby and around the region — a rare combination.

“There is very few fabricators that could fabricate this, and fewer still that could assemble it because we have this full services assembly yard on the water, and that’s the key,” said David Bukovec, general manager from United Engineering Ltd. —  part of Ralmax group.

“Without the real estate here, this project doesn’t come to Victoria.”

Ralmax Group says the project brought in almost $25 million into the local economy, and involved over 50 local suppliers/businesses ,with $5 million in direct subcontractor and material costs.

And during the peak of the COVID-19 pandemic, they were bringing in more crews.

“These are strong good-paying jobs, strongly aligned with Victoria 3.0, which is to use our status as an ocean city and the waterfront lands and industrial lands to create good-paying jobs,” said Victoria Mayor Lisa Helps.

“Protecting those industrial lands for future generations and future well-paying jobs is important.”

The larger stacker-reclaimer unit is around a thousand tonnes.

The smaller “tripper” that is towed behind it is 150 tonnes. The entire unit is slated to move coal at Neptune Terminal in North Vancouver.

“When the rail cars come in with raw materials it will stack them in windrows, and when freighters come to load out the product, the bucket will start up and reclaim it,” said Bukovec.

On Sunday, the Dynamic Beast, the giant floating crane that helped move pieces of the Johnson Street Bridge, will come and lift up the tripper. The stacker-reclaimer is so large, it can only be rolled onto the Dynamic Beast. The two will then be floated away

“There’s not a lot of room to spare,” added Bukovec. 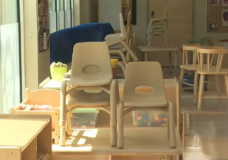 No timeline for when View Royal YMCA/YWCA will reopen, if it does 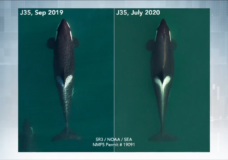