Plans are underway to host a mass COVID-19 immunization clinic at a Langford arena, CHEK News has learned.

“It’s a large facility and we can run a lot of vaccinations through there so it’s one of the best locations and it’s available,” Young said.

“I’m just glad to see them moving ahead with this, there’s more hope now for people to actually get a shot in their arm soon if they’re setting up locations,” he said.

The arena is located at Eagle Ridge Community Centre, which confirmed in an email to arena users Tuesday it was cancelling all bookings between Friday, Feb. 19 and August 2021.

“We expect the dry floor to be available to users around Sept. 2021, depending on how the vaccination process with Island Health progresses,” the community centre said in a statement.

The Juan de Fuca Lacrosse Association said it was shocked when it received the email and is now scrambling to find alternate places to play for its roughly 250 youth members.

“It was a little sudden and a little breathtaking to get that email and start scrambling to find something to use for the remainder of the term we needed it for,” said JDF Lacrosse Association President Ryan Hyland.

Hyland says there are very few dry floor arenas in the region and while he understands the need for the clinic, and why the arena is a good location, he says it will be difficult to find somewhere else to play. But he says he’s still determined to get the kids out no matter what it takes.

“It gets them out and gets them activity and friendships and fresh air and all of that stuff so I believe that sports is really really important for kids these days because of what we’ve been going through over the last year,” Hyland said.

“Even if we have to build boards and put them in a parking lot we’ll figure something out for the kids.”

The province unveiled its plans for widespread vaccinations in January, saying 4.3-million adults in B.C. would receive their first and second doses of the vaccine by September.

The Ministry of Health did not confirm the location would host an immunization clinic, but a spokesperson said regional health authorities are underway in their planning for general population immunizations.

It will all be part of a further roll-out plan in the coming weeks.

Vaccinations are rolling out in four phases, with residents and workers in long-term care homes and First Nations communities getting immunized first.

High-risk populations including seniors more than 80 years old will receive the shot next through March.

The mass vaccination clinics will be introduced in April under Phase Three in 172 communities across the province.

For more information on who can get vaccinated and when, visit the Ministry of Health’s immunization website. 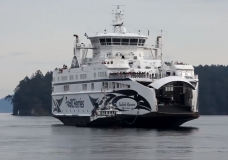