WATCH: A longtime truck driver who used his vehicle to stop a 93-year-old man driving the wrong way on the Trans-Canada Highway says the incident serves as a warning. April Lawrence reports.

As a pickup truck raced the wrong way down the Trans-Canada Highway in Langford Thursday morning a semi truck slowly pulled in front of him forcing him to stop. The driver who helped defuse that potentially deadly situation was Scott Bird.

“I saw the headlights and I thought this is not going to end well so let’s just get stopped and hope the guy stops in front of me,” said Bird, who has been a commercial truck driver for 33 years and also appears on Highway Thru Hell.

“If he wanted to hit somebody I’d rather him hit a big truck rather than a little car with kids in it,” he said.

When Bird and another man on the scene, an off-duty RCMP officer, approached the driver they discovered he was a 93-year-old man who had become confused and made an improper U-turn on the highway.

“He was extremely confused, very scared looking, so you know all we did we just talked with him a little bit until the police arrived,” said Bird.

The incident in Langford comes just two weeks after 97-year-old Prince Philip caused a serious crash while pulling out of a driveway in England. One woman was injured and the crash had people questioning, once again, when elderly drivers should hang up their keys for good.

Driving school instructor Steve Wallace says age isn’t always an indicator of how capable someone is behind the wheel.

“There are people that drive extremely well well into their 90s. It’s all a matter of skill and safety there are others that shouldn’t be on the road in their 70s,” Wallace said.

In B.C. drivers 80 years and older are required to get a drivers medical exam every two years. If there are issues then they may also have to take a road test, but there is no age limit on how long someone can drive.

“We had a fellow that was 98 turning 99 and he was an extremely good driver,” said Wallace.

Bird says the incident Thursday on the TCH serves as a warning and he’s urging people to check in with their aging relatives.

“Just observe how they are behind the wheel and bring up that conversation with them if you feel it’s necessary,” he said.

“It’s a topic that needs to get addressed and not leave it to ICBC to pull their licenses away from them after an incident, I think we should be more proactive in making sure they’re safe from the beginning,” Bird said.

The 93-year-old driver was issued a violation ticket and was followed home by police to make sure he got there safely. 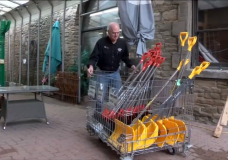 Dust off those snow shovels, winter is coming to Vancouver Island 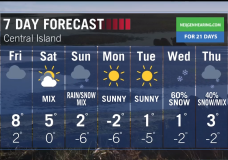 Forecast: Saturday stays mild but cold air and possible snow is the outlook for Sunday