Neighbours looked on shaken and worried Thursday, as RCMP officers combed for clues to a fatal Christmas Eve assault on Duncan’s Trunk Road.

“It was crazy I tell you,” said Duncan resident Percy Jack.

“You’d figure everybody would be happy and having a good time with friends,” he said.

“Then all of a sudden we get this terrible news,” said Bill.

So they were counting on investigators with the Vancouver Island Major Crimes Unit to find the clues they were looking for, as they hacked through blackberries near the Trunk Road crime scene.

“I’m just feeling for whoever was related to those people,” said Duncan resident Barb West.

“It’s just gotta be a tragedy,” she said.

Percy Jack was on his way home from a Christmas eve party at around 11 Tuesday night, when he passed by what later turned out to be the victims of the attack.

“I heard a lot of screaming,” said Percy Jack.

“They were acting like there was a fight,” he said.

No sooner did the Duncan senior get in his front door, than he said ambulances were rushing to the scene.

RCMP say that a man and woman were found badly injured on the grass of Charles Hoey Park. Both were rushed to hospital, but the man suffered life threatening injuries and was pronounced dead soon after. She is still in hospital undergoing treatment.

“I feel scared for the other women and people that walk around here and are homeless you know. It’s been a long time since I’ve heard of something like that in Duncan,” he said.

RCMP said they believe the assault was an isolated incident, but are not commenting on whether any arrests have been made. 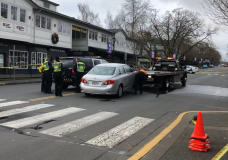