WATCH: When’s the last time you chucked a chum? Well, people were out doing just that today in Mount Doug Park. Volunteers were heaving coho, sockeye — you name it — into the river to replenish nutrients in the surrounding ecosystem, and help boost the salmon population. Kori Sidaway takes a look.

At the edge of Douglas Creek in Mount Doug Park on Saturday, small but mighty volunteers are heaving frozen salmon as far as they can.

These salmon aren’t going to come back to life, but it’s still a resurrection of sorts.

“It’s really part of the ecosystem to have, basically, salmon fertilizer, what it amounts to, in the creek,” said Darrell Wick, president of Friends of Mount Douglas Society.

This annual fish flinging is an attempt to replenish nutrients in the area and boost the future salmon stock.

The chucked coho and chum carcasses will provide meals for other small animals before they eventually decompose and deliver nutrients to the soil and nearby trees.

Volunteers are also releasing live smolt upstream, with the hope that one day they’ll come back.

“There were salmon here until 1960,” said Wick. “But what happened was Gordon Head became urbanized, and so the water no longer soaked into farmlands, but instead went into storm drains.”

The salmon populations declined severely as a result. But since the mid-1990s, volunteers have been working to restore the river, and the declining salmon stock.

Around one hundred salmon carcasses from this year’s spawn in Goldstream will be transplanted to mimic the historic once large returns of salmon to Douglas Creek.

Luring life with death, hoping to ensure the next generation will come back home. 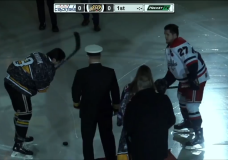 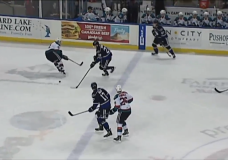