Posted: Dec. 19, 2021 6:47PM | Last Updated: Dec. 19, 2021 6:48PM
CHEK
WatchOne last tournament was left in the season — 18 teams were set to play, which include about 300 players all on the ice at once — for the association, but now that tournament won't be going ahead due to new rules imposed by the B.C. government.
Dozens of teams part of the Victoria Minor Hockey Association are left feeling disappointed after the province announced it’s tightening its COVID-19 restrictions, which include cancelling sports tournaments.

“I mean, obviously, it’s pretty disappointing. Everyone was looking forward to the tournament and it was a real bummer when we found out that it got cancelled,” said Eric Chambers, a minor hockey player.

But the announcement was not surprising for the players and coaches who anticipated tightened lockdown measures due to the spike in cases in the province.

One last tournament was left in the season for the association — 18 teams were set to play, which include about 300 players all on the ice at once.

“We really hope by taking these measures now, that we’ll be able to continue to at least have games until the end of the season. The last thing we want to see is to get it shut down entirely,” said Nicki Reich, the group’s president.

“So hopefully, if we cancel things like tournaments where it’s big groups coming together and kind of stem the flow right now, then our kids will be able to continue playing games for the remainder of the season,” she continued.

Sports teams aren’t the only ones impacted by the new measures — people dining at restaurants can no longer move and mingle between tables, the limitations, according to the B.C. Restaurant and Foodservices Association, aren’t all that bad.

“I think restaurants are relatively unscathed in this. If you look at it in the context of last year, we were closing at 10 o’clock. We didn’t have New Year’s. New Year’s ended at 8. And this year, we’re open,” said the organization’s president and chief executive officer, Ian Tostenson.

With household gatherings limited to 10 outside guests, who all must be vaccinated, he anticipates restaurants might even see a boost in business during these next few weeks.

“And I think restaurants … have been so well prepared for providing that environment of safety,” he said.

While it might be a disappointing and frustrating time for some, health experts, including Dr. Brian Conway, the medical director of the Vancouver Infectious Diseases Centre, have said the response from the province is necessary, calling the Omicron variant a game-changer.

But even with the new restrictions and last-minute change of plans, it won’t stop the hockey players of the Victoria Minor Hockey Association from sharpening their skills on the ice. 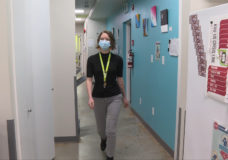