Gas-powered leaf blowers have been a hot button topic around city council tables across Greater Victoria for years. Monday night, Oak Bay will take its turn to vote.

Oak Bay councillors will vote to possibly “phase out” not just leaf blowers but any gas-powered gardening tools in Oak Bay by 2023.

The municipality is already phasing out its municipal fleet’s gas-powered gardening equipment by 2025, and it’s the same concerns about pollution and noise that are powering this proposition.

“They put out an enormous amount of pollutants,” said Francis Landy whose petition to phase out gas-powered gardening tools in Oak Bay has gathered more than 600 signatures.

“The emissions are not good to breathe in,” said Kevin Bunting, owner of Island Horticultural Services.

The California Air Resource Board says the pollution created by using a gas-powered leaf blower for an hour is equal to driving 1,770 kilometres.

For many others, including Landy, it’s not just climate concerns. The noise he says impacts his quality of life as well.

“I’m trying to write a book and it’s rather infuriating to wear ear protectors in one’s own house,” said Landy.

“According to manufacturer reports, the sound pressure levels of these machines exceed 95 A-weighted decibels (dB[A]) at the ear of the operator and typically 65-80 dB(A) at 50 feet,” wrote researchers Erica Walker and Jamie L Bank in their study Characteristics of Lawn and Garden Equipment Sound: A Community Pilot Study in 2017.

“Comparing these levels to daytime sound standards set by the World Health Organization (WHO)- these levels are upwards of 15 dB(A) higher than the recommended 55 dB(A)).”

More cities in North America are considering phasing out gas-powered gardening tools: Washington D.C., the state of California, Vancouver, Toronto, Ottawa, and Victoria are some examples.

Meanwhile, city staff are in the process of developing reports related to amending the city’s noise bylaw, which could in turn ban gas-powered blowers.

“Our aim is to have the first batch of Noise Bylaw amendments to Council by mid to late summer.  An amendment related to regulating gas-powered leaf blowers is among the first batch,” said Bill Eisenhauer, spokesperson for the City of Victoria.

The same motion as Victoria was looked at in Saanich earlier this year, but it failed to pass.

The motion in front of Oak Bay council Monday night doesn’t mention a change to the municipality’s noise bylaw.

Meanwhile, as Oak Bay councillors get set to vote, those in the industry say it’s too soon to make a complete switch.

“I’ve been looking at electric for the past five or six years. And the only factor that I’ve found has been cost,” said Bunting.

“The blowers might last an hour on a charge, and then the recharge rate is sometimes an hour to two hours, sometimes half a day. I think the last time I checked the battery packs were over 400 dollars a battery pack.”

Bunting says it would cost tens of thousands of dollars to completely switch the entire fleet he’s built over his 30-year career to electric, and if Oak Bay votes ‘yes’ would force that change to happen in a matter of seven months.

As a result, he says he’ll have to stop doing business in Oak Bay or raise his rates for residents of Oak Bay only. 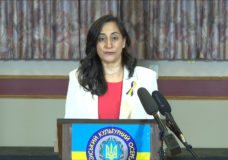 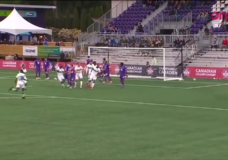