The 77-year-old is now the oldest person to navigate around the globe completely unassisted.

A flotilla was organized to greet her Saturday morning.

“This is one of the greatest voyages of all time, [she is a] 77-year-old who has battled unbelievable hardships on this trip,” said close friend Steve Illman who was on one boat.

Hundreds lined the breakwater and inner harbour to catch a glimpse of the historic moment.

But the journey was not smooth sailing.

You still can see the damage on her 38-foot sailboat “Nereida”, where her radar dish, and backup sail, are jerry-rigged.

Her mainsail was ripped from a storm, her solar panels disappeared overboard and her steering system was barely holding together.

She already holds the record as the oldest woman to do the journey, back in 2013 — but that wasn’t enough.

And before her previous attempt at this record in 2017, she fell of her boat at dry-dock and broke her neck and ribs, but she recovered and eventually set sail.

“She was not in the best physical shape when she left, but she managed, she survived this journey and repaired that boat against great odds and we are amazed by her resourcefulness,” said Illman.

Just after 5 p.m. her feet touched dry land for the first time.

“The wind gods have not been with me, two cyclones off Hawaii to avoid, and a cyclone off the Indian ocean to avoid, I wasted a week with that,” said Socrates, when she arrived at the inner harbour.

And she couldn’t thank the public enough for their support.

“they’ve sent me such great messages, I think they like the fact that I’ve persevered and overcome so many problems on the way around, and that I show it can be done,” she said.

After an incredible journey with many hardships, she now gets the luxury stay she deserves.

It’s an end fit for the explorer she has become. 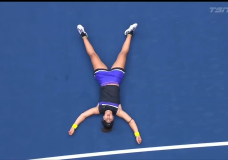