Lila Hardy is worried about her eight-year-old son Jace Strangways.

“It’s definitely a scary thing,” said Hardy, a mother of two. “We’re kind of split in two what we want to do. If we want to pull him out or if we want him to stay.”

It’s a question that thousands of Vancouver Island parents are facing.

“It’s a scary thing to go to school with COVID around,” added Hardy.

According to the Nanaimo District Teachers Association, everyone is feeling it.

According to Island Health, the increase in COVID-19 exposures in schools is a reflection of the greater number of positive cases within the community. Following the increase not leading it.

“So you see lots more cases in the community and those kids just end up coming to school,” said Island Health medical health officer for the Central Island, Dr. Sandra Allison.

“What I’d like to say is we’ve not seen multiple cases in schools,” she said.

“So when we do see a case show up in school we have a really rapid response,” said Dr. Allison.

That rapid response is leading to COVID-19 being contained within most schools to a single positive case, according to officials.

Despite this, the province planned to announce more safety measures for schools Thursday, to reduce the risk further.

“We’re hearing that the new variants are more transmissible,” said Inscho. “And so what we’re doing so far might not be enough.”

Hardy said she would be watching closely.

“If I hear of any more cases, I will have to pull him out,” she said. 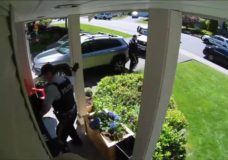