‘It’s a lifeline’: Passengers scramble to get home as Tofino Bus suspends service

Tina Akland was desperate to get on the last Tofino bus leaving Nanaimo Monday. The service was about to be suspended, and it was urgent she got home to Port Alberni.

“Well, I’m coming home to see my brother because my dad passed away right before Christmas. This is the only way I can get home because I don’t drive,” said Akland, who now lives in Vancouver.

As of Tuesday, Jan. 3, Tofino Bus and the Vancouver Island Connector are suspending Victoria to Tofino service until May, leaving passengers who use it unsure of how they will get to and from their remote communities on the west coast.

“I tried to change my ticket to tomorrow, and there’s no more buses, there’s nothing else,” said Port Alberni resident Ky Bennett.

“I mean, the west coast is kind of in shock because there was hardly any notice. Like they just cancelled it. That notice has just gone out. So there’s all kinds of people trying to figure out what they’re going to do in January who had reservations,” said Ucluelet resident Christine Brice.

Basil Webster was travelling to Ahousaht to visit his parents on Monday and didn’t know how he would return to Victoria.

“I try to get up there to visit quite a bit, but it’s going to be hard to get there more often now,” said Webster, a Victoria resident.

According to Wilson’s Transportation, which operates the Vancouver Island Connector and Tofino Bus, ridership has plummeted 95 per cent since the pandemic, and that financial loss forced this cut.

“We wish this wasn’t a decision we had to make but coming out of the pandemic where the transportation sector suffered heavy losses, we can’t continue to operate at a loss,” said Samantha Wilson-Newton, brand manager for Wilson’s Group of Companies.

‘Island Link Bus’ will continue to provide service from Victoria to the North Island along the east coast, but now there’s no link west. So Wilson’s Transportation is urging the province to step in and subsidize the service year-round.

“This is how I’ve stayed in touch with my family, so yeah, I’m gonna really miss it,” added Akland.

So Akland boarded the last bus she could on Monday to be with her family, as she and the many who rely on the bus service try to find a new way home now that’s safe. 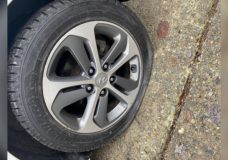 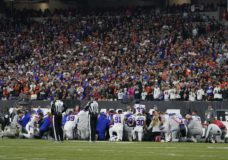