‘It feels like a miracle’: Survivors of residential and day schools learn to read, write at VIU

Posted: Oct. 18, 2021 5:52PM
CHEK
WatchAn emotion-filled class at VIU has brought survivors of residential schools and Indian Day schools together, to learn what was lost in their childhoods. 16 elders will learn how to read and write, after early trauma derailed their schooling. Skye Ryan reports.

For years, Linda Jack has wanted to learn to read for her grandchildren. Now at 62, the Indian day school survivor is getting that chance.

“It feels like a miracle,” said Jack, a Duncan resident and grandmother of seven.

Jack sought help for her literacy skills and made VIU aware that no program exists for elders who’ve spent their lives in arrested development due to residential schools, Indian day schools and the ’60s Scoop.

Her advocacy worked. On Monday, a class called the Literacy Circle began at VIU’s Nanaimo campus to teach 16 students reading, writing and skills they have never gained.

It’s why at 69, and while battling cancer, Kathy Jim is attending too.

“Yeah I still want to be here even though I’ve got cancer,” said Jim, an Indian Day school survivor.

“I can finally make it now without somebody saying negative stuff to me,” said Jim.

“It’s heartbreaking and it’s inspiring. The courage that these elders have to come and embrace education after what they dealt with,” said Mary Desprez of the First Elders Training, Healing, Education & Respect Society.

“I have got lots of family and friends that are really happy about what I’m doing and it’s cool, because I’m 62 and it doesn’t matter how old you are you can get up and say hey let’s rock and roll,” said ’60s Scoop survivor Norm Mitchell.

With donated lunches and school supplies, students will learn at VIU tuition-free, and be welcomed at school like they’ve never felt before.

“They’re going to put me in grade one and work my way up I’m kind of hoping to be in grade six by summer,” said Jack.

The pilot program at VIU will last seven weeks and organizers hoped to start up a second class for 16 more elders in January. 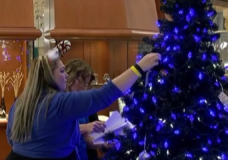 Victoria's Festival of Trees fundraiser is struggling to fill spots