Islanders calling on province to divest from Russia

As Russian forces continue to invade Ukraine, western countries are imposing sanctions in an effort to stop Putin.

On Vancouver Island, calls to divest from Russia are growing after it was discovered that more than $400 million of BC’s public sector pension plans are invested in Russian assets.

“This does not feel right,” said Matt Dell, a civil servant with the BC government.

“My initial reaction was disappointment and sadness. Knowing that, in some weird way, we are supporting Russia and the Russian economy and I just feel a bit of shame,” he said.

He and his colleagues made the discovery this week, most of the investments are going to Russia’s oils, gas, metals and banks.

Now there’s a local push to end that and dozens have signed a petition calling on the province to divest from Russia.

“These people are losing their parents. Their children. Their neighbours. Those are real losses. Losing a percentage point on an investment is not a loss for me,” Dell said.

He said he feels helpless about what’s going on in Ukraine and this is the least he can do to show his support for the country.

“If we pulled vodka from the liquor store shelves, why wouldn’t we pull the money from the oil and gas companies?” Dell asked.

British Columbia Investment Management Corporation (BCI) did not respond to a request for comment in time for publication.

Meanwhile, people across Victoria are hoping to show their support, with many seeking to buy Ukrainian flags to wave during Sunday’s rally for Ukraine.

Paul Servos, the owner of The Flag Shop in Victoria, says his phone has been ringing non-stop this week.

He and his wife and co-owner of the business, Maggie Rennick, said they have seen many emotional customers visiting their store since the Russian invasion.

“Our hearts and spirits are with everybody that’s there,” said Servos.

They don’t normally work the weekends, but they made the exception this week given the huge demand for Ukrainian flags.

Rennick, who has roots in Ukraine, said it’s been heartbreaking watching the attacks unfold back home.

“I think I’m going to cry. I just feel sadness, you know, I just want to support everybody,” she said.

They’re expecting a large crowd to show up out front of the BC’s Legislature tomorrow sporting blue and yellow — demonstrating their solidarity with the people of Ukraine. 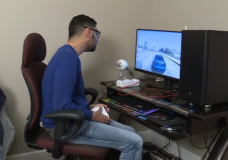 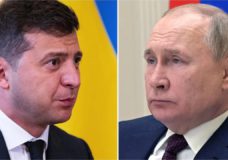