July 8th, 2020updated
WATCH After more than 50 years as the Saanich Junior Braves, the club will be dropping their indigenous name and logo.
File Photo
The owners of a Vancouver Island Junior B hockey club have made the decision to change their team’s name and logo amid an ongoing international conversation surrounding racism. The Saanich Junior Braves, a member of the Vancouver Island Junior Hockey League, announced that change was needed as owners felt their moniker was “not respectful to our First Nations.” The Junior Braves name and logo has been used since 1967, however, the team has made the decision to develop a new name that aligns closer to the club’s core values. “Community, excellence and equality are central to everything we do as a hockey team and we commit to our players, families, fans and the whole community to use the changing of our name as an opportunity to contribute to and amplify positive dialogue about race and equality in Canada,” said Edward Geric and Norm Kelly, team owners.

In addition to issuing a press release on Wednesday, the club altered its social media profiles by removing the former logo and changing account names to read ‘Saanich Jr. B Hockey.’

According to the team, more information about the renaming process will be announced in the coming weeks.

The decision by the VIJHL squad to change names comes amid a bigger, ongoing conversation surrounding racism in sports. Fans and sponsors have called upon teams at all levels, and across a variety of sports, to consider name changes in instances of perceived racism.

“We’re in 2020 and this is no longer acceptable, When they take on these names, it only further perpetuates the stereotypes and racism that exists,” said Tsartlip First Nation Chief Don Tom, in a brief interview with CHEK.

Earlier this week, a long-time sponsor of the CFL’s Edmonton Eskimos suggested use of the name was no longer appropriate and told the football club they needed to see concrete action if a partnership were to continue.

In response, the Edmonton Eskimos said they would be “accelerating” a review process, seeking further input from the Inuit and other stakeholders.

The NFL’s Washington Redskins and Major League Baseball’s Cleveland Indians have faced backlash for several years over their team names. Washington has come forward claiming they will be conducting a “thorough review” of their moniker. Cleveland also announced its willingness to discuss changing the team’s nickname, with plans to consult the Native American community before making a final decision. On the other hand, the NHL’s Chicago Blackhawks have revealed they will not consider change as their team name represents a person important to the city’s history. “The Chicago Blackhawks name and logo symbolize an important and historic person, Black Hawk of Illinois’ Sac and Fox Nation, whose leadership and life has inspired generations of Native Americans, veterans, and the public,” the team told Scott Powers with The Athletic. The professional hockey club has been using variations of their current name and logo since its inception in 1926, officially changing their name from ‘Black Hawks’ to Blackhawks in 1986. Amid a revived conversation and calls for action, we could very well see more clubs following in the footsteps of Saanich Junior B Hockey. 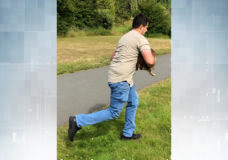 ‘He had it in a chokehold:’ Man who allegedly abused dog at Saanich park facing charges