WATCH: An island artist was shocked to find his paintings were being stolen from right under his nose. Well, sort of. A fraudster across the world in Albania was claiming the artwork as his own to con his way onto local popular talk shows. As Kori Sidaway tells us, stealing art may be nothing new, but the internet has changed how art heists look.

But in the age of the internet, the game has changed a bit. All you seem to need is some photoshop skills and an Instagram account.

The only hitch? The art wasn’t his own. It was internationally known acrylic painter Blu Smith’s.

“I don’t think he was expecting that Blu Smith fans were in the audience at the time,” said Smith.

Reka was called out on live TV for the lie, leaving many including Smith, shocked.

“What people didn’t see behind that painting of mine, on the stage, was 30-years of hard dedicated work perfecting my craft,” said Smith.

“So I had this young man riding my coattails, and that’s just wrong.”

Reka has since taken the post down, and went back on the show to apologize a few days later, but still no word to CHEK News, or to Smith.

Meanwhile the original piece, since painted over, sits in Smith’s Island studio.

“I’m pretty sure that this is the guy here,” said Smith pulling it out of storage.

Where it will remain, with Smith getting back to work.

“Of course I keep painting. I never stop,” said Smith. 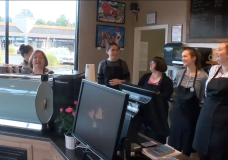 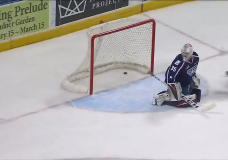