Posted: Apr. 1, 2020 6:35PM
CHEK
WatchThe shutting down of our borders is creating a shortage of illicit drugs on Vancouver Island.

Anxiety was running high among drug users in downtown Nanaimo Wednesday as illicit drugs began to run out and the very feared pains of withdrawal set in.

“It’s hell. You just want to peel your skin off,” said Nanaimo drug user Ray Kay, as he described the symptoms of withdrawal.

Border closures that are in place to stop the spread of COVID-19 have also cut into the transportation networks of illicit drugs of heroin, cocaine and fentanyl that have led to the addiction of so many.

“A lot of our stuff comes over the border,” said Nanaimo drug user Mattie Dunbar.

“And its harder to do that now because the borders are closed.”

According to outreach worker Chris Klein, there is overwhelming fear in the street community right now.

Prices for street drugs are being jacked up as well as the law of supply and demand even stretches out here.

“Because its harder to get right.”

“Then we got a lot of sick people that are jonesing for drugs,” said Klein.

“They get very sick,” said Nanaimo resident Linda Schmidt, who has several friends on the street.

“Some people die from dope sickness.”

This all developing at the same time that medical workers are so badly needed to deal with COVID-19 patients.

Homeless advocate Gord Fulller said the situation is dire on the streets in this pandemic.

According to Nanaimo RCMP, break and enters have been on the rise in recent weeks.

“In the last two or three weeks there’s been a significant uptake In break and enters to commercial properties and theft from vehicles,” said Const. Gary O’Brien of Nanaimo RCMP.

Drug treatment centres are still operating in this pandemic, but there are waitlists and no drug users we spoke to said they were considering taking that path yet. 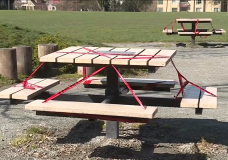 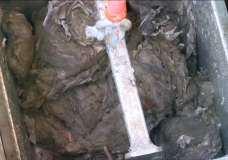 Wastewater systems being clogged with wipes during COVID-19 crisis