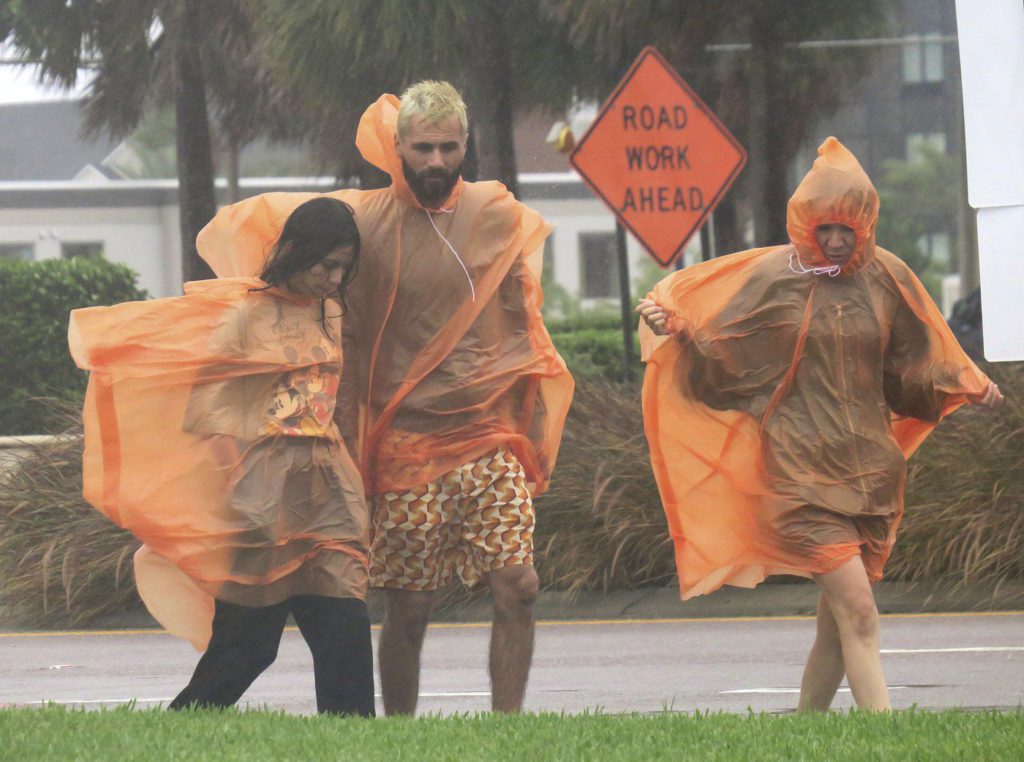 CHEK
People in raincoats walk along International Drive in Orlando, Fla., Wednesday, Sept. 28, 2022, as the first effects of Hurricane Ian are felt in central Florida. (Joe Burbank/Orlando Sentinel via AP)

Hurricane Ian, one of the most powerful storms ever recorded in the U.S., swamped southwest Florida on Wednesday, turning streets into rivers, knocking out power to 1.6 million people and threatening catastrophic damage further inland.

A coastal sheriff’s office reported that it was getting many calls from people trapped in homes. The hurricane’s center struck near Cayo Costa, a protected barrier island just west of heavily populated Fort Myers.

Mark Pritchett stepped outside his home in Venice around the time the hurricane churned ashore from the Gulf of Mexico, about 35 miles (56 kilometres) to the south. He called it “terrifying.”

“I literally couldn’t stand against the wind,” Pritchett wrote in a text message. “Rain shooting like needles. My street is a river. Limbs and trees down. And the worst is yet to come.”

The Category 4 storm slammed the coast with 150 mph (241 kph) winds and pushed a wall of storm surge accumulated during its slow march over the Gulf. More than 1.6 million Florida homes and businesses were without electricity, according to PowerOutage.us. The storm previously tore into Cuba, killing two people and bringing down the country’s electrical grid.

About 2.5 million people were ordered to evacuate southwest Florida before Ian hit, but by law no one could be forced to flee. Nearly every home and business in three counties were without power.

News anchors at Fort Myers television station WINK had to abandon their usual desk and continue storm coverage from another location in their newsroom because water was pushing into their building near the Caloosahatchee River.

Though expected to weaken to a tropical storm as it marches inland at about 9 mph (14 kph), Ian’s hurricane-force winds were likely to be felt well into central Florida. Hours after landfall, top sustained winds had dropped to 125 mph (205 kph), making it a Category 3 hurricane. Still, storm surges as high as 6 feet (2 metres) were expected on the opposite side of the state, in northeast Florida.

“This is going to be a nasty nasty day, two days,” Florida Gov. Ron DeSantis said, urging people in Ian’s path along the Atlantic coast to rush to the safest possible shelter and stay there.

Jackson Boone left his home near the Gulf coast and hunkered down at his law office in Venice with employees and their pets. Boone at one point opened a door to howling wind and rain flying sideways.

“We’re seeing tree damage, horizontal rain, very high wind,” Boone said by phone. “We have a 50-plus-year-old oak tree that has toppled over.”

In Naples, the first floor of a fire station was inundated with about 3 feet (1 meter) of water and firefighters worked to salvage gear from a firetruck stuck outside the garage in even deeper water, a video posted by the Naples Fire Department showed. Naples is in Collier County, where the sheriff’s department reported on Facebook that it was getting “a significant number of calls of people trapped by water in their homes” and that it would prioritize reaching people “reporting life-threatening medical emergencies in deep water.”

Ian’s strength at landfall tied it for the fifth-strongest hurricane when measured by wind speed to strike the U.S. Among the other storms was Hurricane Charley, which hit nearly the same spot on Florida’s coast in August 2004, killing 10 people and inflicting $14 billion in damage.

Ian had strengthened rapidly overnight, prompting Fort Myers handyman Tom Hawver to abandon his plan to weather the hurricane at home. He headed across the state to Fort Lauderdale.

“We were going to stay and then just decided when we got up, and they said 155 mph winds,” Hawver said. “We don’t have a generator. I just don’t see the advantage of sitting there in the dark, in a hot house, watching water come in.”

Florida residents rushed ahead of landfall to board up homes, stash precious belongings on upper floors and join long lines of cars leaving the shore.

Some decided to try and ride out the storm. Jared Lewis, a Tampa delivery driver, said his home has withstood hurricanes in the past, though not as powerful as Ian.

Ian made landfall more than 100 miles (160 kilometres) south of Tampa and St. Petersburg, sparing the densely populated Tampa Bay area from its first direct hit by a major hurricane since 1921.

Flash floods were possible all across Florida. Hazards include the polluted leftovers of Florida’s phosphate fertilizer mining industry, more than 1 billion tons of slightly radioactive waste contained in enormous ponds that could overflow in heavy rains.

The federal government sent 300 ambulances with medical teams and was ready to truck in 3.7 million meals and 3.5 million litres of water once the storm passes.

“We’ll be there to help you clean up and rebuild, to help Florida get moving again,” President Joe Biden said Wednesday. “And we’ll be there every step of the way. That’s my absolute commitment to the people of the state of Florida.”

DeSantis has requested Biden grant a Major Disaster Declaration for all 67 of the state’s counties, which would open a range of federal assistance for residents and funding for public infrastructure repairs. DeSantis has also requested Biden allow FEMA to provide a 100% federal cost share for debris removal and emergency protective measures for 60 days.

The governors of Virginia, Georgia, South Carolina and North Carolina all preemptively declared states of emergency. Forecasters predicted Ian will turn toward those states as a tropical storm, likely dumping more flooding rains into the weekend, after crossing Florida. 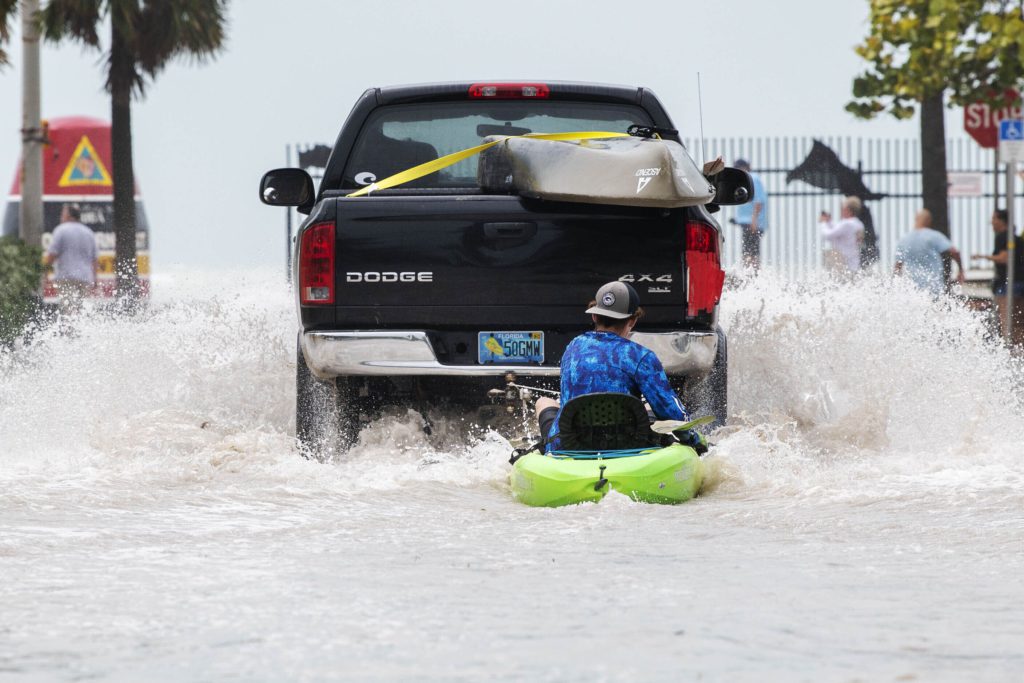 A truck pulls a man on a kayak on a low-lying road after flooding in the aftermath of Hurricane Ian, in Key West, Fla., Wednesday afternoon, Sept. 28, 2022. (AP Photo/Mary Martin) 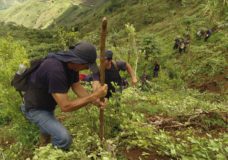 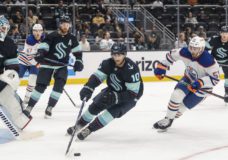