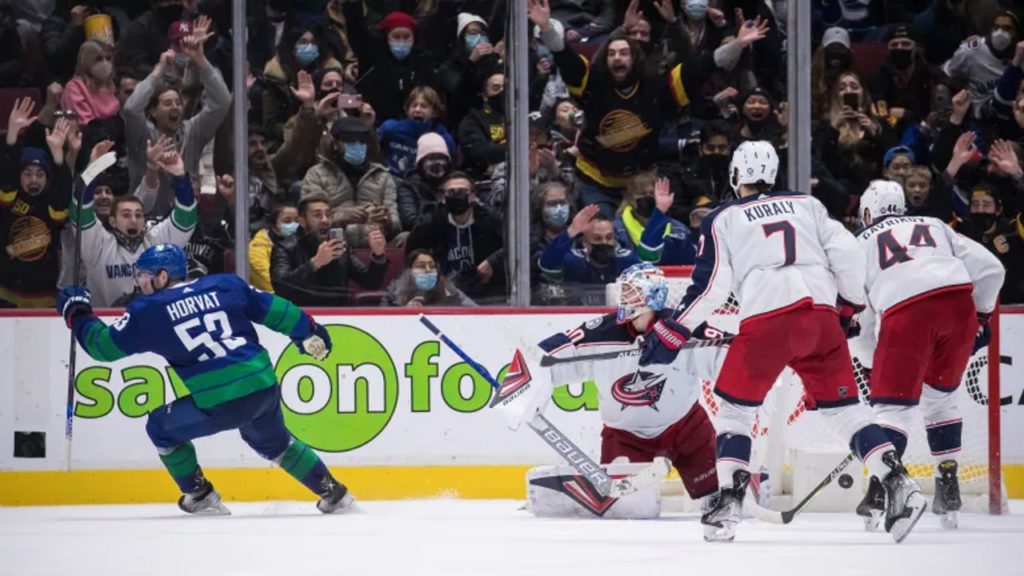 The Vancouver Canucks capped a chaotic day with a massive comeback Tuesday, rallying to beat the Columbus Blue Jackets 4-3.

“We all talk about it and sometimes people didn’t think they had character at the beginning but you can tell, this is a team that played the last 50 minutes with five defencemen, down 3-0 and they battled back,” he said. “The goalie battled back from a rough first period, and played really solid, so it’s a team that wants to win.

“When you got something like that, it’s a really special feeling for a coach.”

The victory extends the Canucks’ win streak to five games, all under Boudreau, who took over on Dec. 5.

Eric Robinson had two goals for the Blue Jackets (14-12-1), who also got a goal from Max Domi and two assists from Alexandre Texier.

Jaroslav Halak made his first start since Nov. 28 and stopped 21-of-24 shots to collect his first win in a Canucks jersey. Elvis Merzlikins made 35 saves for Columbus.

Vancouver went down to five defencemen midway through the first period after Tucker Poolman was pulled from the game and placed in the NHL’s COVID-19 protocol.

“I guess the test came back a little late and while he was playing and so once the test came back, he was positive, we had to pull him off the ice,” Boudreau said. “So we just followed all the NHL guidelines and the NHL protocols and that’s what happened. It would have obviously been nicer if we had got the result before the game but we didn’t.”

Vancouver recalled Phillip Di Giuseppe from the American Hockey League’s Abbotsford Canucks on Tuesday to help bolster the depleted roster. To make room for the transaction, defenceman Travis Hamonic was placed on long-term injured reserve with a lower-body injury.

The Canucks came into the third period down 3-1 but outshot the Blue Jackets 13-7 in the final frame.

“I just think we believe in each other. A lot of guys are playing good hockey. Obviously, there’s just a new life, a new energy in the room. And it’s showing on the ice,” Horvat said. “I just find this team right now has no quit.”

Vancouver got a prime opportunity with just 72 seconds left on the game clock when Blue Jackets defenceman Andrew Peeke was called for holding.

The Canucks called a timeout to scheme, then J.T. Miller sent Horvat a blistering pass that the captain deflected in past Merzlikins to give the home team a 4-3 lead with just 58.8 seconds to go.

Vancouver was 1 for 2 with the man advantage Tuesday and the Blue Jackets were scoreless on their lone power play.

Podkolzin buried the equalizer 9:35 into the third. The Russian rookie collected the puck from Hughes and fired a quick wrist shot in past the Columbus netminder.

Rogers Arena erupted in chants of “Bruce, there it is!” in tribute to the team’s head coach.

Pettersson narrowed the deficit to a single goal 4:07 into the third, picking up the rebound on a Garland’s shot and jamming a wrist shot in from the side of the net. It was the Swedish centre’s sixth goal of the season.

With the Canucks down 3-0 heading into the first intermission, Boudreau spoke to his group about their potential.

“Obviously (Boudreau) knows how we can play. We showed it in the first four games with him, ” Horvat said. “He just kind of reiterated a lot of the good things we do when we’re successful and we obviously didn’t do that in the first period.

“We kind of picked each other up and talked as a group and proved it in the second and third. And that’s the way we want to play all the time. And that’s how we have to play for a full 60 next time.”

Tempers flared midway through the second after Columbus defenceman Vladislav Gavrikov cross-checked Conor Garland behind the net. Garland was quick to drop his gloves as the whistle blew, but no real blows were exchanged before the pair were separated by officials.

Garland was called for roughing and Gavrikov headed to the box for cross-checking, leaving each side with four men apiece.

Vancouver took advantage of the open ice, with Horvat getting the puck at the top of the circle, quickly assessing his options, then rifling a shot over Merzlikins for his eighth goal of the year.

The Canucks struggled mightily through the first period, getting solidly out-chanced and repeatedly turning over pucks.

Robinson put away his second goal of the night 16:18 into the game. He beat Horvat and Tanner Pearson in a foot race through the neutral zone, got to the puck first and blasted a shot from inside the face-off circle, beating Halak glove side to give Columbus a 3-0 lead.

Domi put the visitors up earlier in the frame. Halak stopped a long bomb by Gabriel Carlsson but couldn’t control the rebound and Domi tapped it in from the side of the net.

The Blue Jackets opened the scoring 4:20 into the first period off a two-on-one rush. Vancouver defenceman Noah Juulsen dropped to the ice in an attempt to stop a pass from Texier to Robinson, but his manoeuvre came too early. Texier dished the puck to Robinson at the top of the crease and the left-winger popped it in past Halak for his fourth goal of the season.

This report by The Canadian Press was first published Dec. 14, 2021. 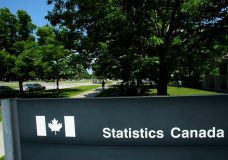 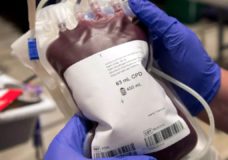