Posted: Apr. 28, 2021 5:48PM
BC Government/File
More than a year after the start of the COVID-19 pandemic, B.C. Premier John Horgan announced Monday the province would implement a paid sick days program.

More than a year after the start of the COVID-19 pandemic, B.C. Premier John Horgan announced Monday the province would implement a paid sick days program.

“As of two o’clock today, we have, I think, unanimous consent in this place to bring forward a paid sick leave program,” he said. “That will be happening in the days ahead. I look forward to the very brief debate and the implementation of a program.”

A day earlier, Horgan said the province was working on its own sick pay program after failing to see support for such a policy in the federal government’s budget.

He said he tried to convince Ottawa to boost a program it created, which only provides $500 per week to sick workers and requires an application and waiting process.

Advocates say that B.C. implementing a paid sick leave program could be a matter of life or death.

Many of B.C.’s frontline workers earn less than $40,000 and calling in sick is an issue for thousands of them, according to the Workers’ Solidarity Network, a B.C. organization that “combats workplace exploitation.”

The network has launched a campaign calling on the province to provide all employees with paid sick days under the Employment Standards Act.

Spokespeople for the organization say currently, the process for calling in sick can be an unnecessarily bureaucratic one for front-line workers.

“A lot of the time they’re worried about getting fired,” said Anna Gerard. “Sometimes they have to provide a sick note which is a whole ordeal for them, so not having it before going in definitely poses a lot of problems.”

As a result, many people just end up going to work sick becase they don’t have a safety net and don’t want to deal with the fallout, she said.

And even employers agree.

“Having that peace of mind for everybody to have sick days, not worry about losing any pay, it’s huge. It’s very, very important,” said Craig Cavin, the South Island operations manager for Country Grocer.

Cavin said his business has operated with paid sick days on the South Island for some time, but he’d like to see that extended to all front-line workers.

“We’re dealing with the public, everybody in this industry, and the amount of people that come through these stores, and so on, it’s in the thousands during every day,” he said.

Gerard said she’d like to see the program implemented under the Employment Standards Act “because that way, there’s no questions.”

Under the act, paid sick leave would be a right had by all employees across the province regardless of income.

There are no details on the program yet, but the BC Federation of Labour would like to see one with 10 paid sick days per year. 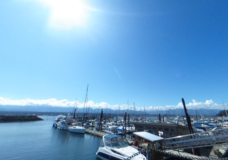