June 15, 2020 updated
CHEK
Watch A proposed strip mine in the Highlands has seen a lot of pushback from the community. Four years after the project was first proposed, the company in charge has received a mining permit from the province. But the Highlands community is hoping to quash that decision by taking it to the courts. Jasmine Bala reports.

A community association is hoping that a proposed rock quarry in the District of Highlands won’t be set in stone.

The Highlands District Community Association has filed a petition with the BC Supreme Court to put a stop to the proposed rock quarry by O.K. Industries.

The rock quarry project was granted a mining permit by the province in March 2020, four years after the Victoria-based company originally came up with the idea for the strip mine on their property just off Millstream Road in the Highlands.

“This project just does not have social license here,” said Scott Richardson, chair of the Highlands District Community Association. “We don’t want it and we don’t agree with it.”

The association has filed an application to the supreme court for a judicial review of the province’s approval of the rock quarry, citing a lack of public interest considerations and input.

“We are hoping that in that process, we will finally get a fair hearing,” said Richardson.

Ever since the quarry was brought up as a possibility, O.K. Industries has faced a lot of pushback from the community due to concerns about its location.

“There’s a real risk that with these known toxins underground here, that blasting has a real chance of making them move and having them move into the groundwater,” explained Richardson.

Groundwater is a resource that Highlands residents rely on for their drinking water.

“The community is very concerned about groundwater and always have been,” said Highlands Mayor Ken Williams. “We spend significant sums amounts of money protecting our groundwater, monitoring it.”

Williams said that’s why council denied O.K. Industries rezoning application in 2016 to change the land to industrial use. In 2017, O.K. Industries applied to the province for a mining permit.

“This is a process that is determined by one statutory decision-maker through the Ministry of Mines,” explained Williams. “So we had a referral at that time and we, once again, put down all of our concerns and reasons why we thought it was not the best choice of a place for a gravel pit.”

On March 11, 2020, the CRD board also voiced their opposition, supporting the district’s decision.

One week later, however, the permit was granted to O.K. Industries by the province.

In an email to CHEK News, O.K. Industries’ corporate advisor Mel Sangha said the issues brought up by residents were communicated to the company by the Ministry of Energy Mines and Petroleum Resources (MEMPR) during the permit application process.

“We hired several third party professional consultants who evaluated the concerns and provided us with recommendations as to how to operate the quarry,” he said. “We submitted these reports to MEMPR who in turn had their professional staff evaluate our proposed operations.  The result of their review was MEMPR issued the permit.”

Sangha added the permit was issued because their plan addressed the concerns that were raised and met the requirements of MEMPR.

Richardson said he wasn’t surprised by the province’s decision, but was disappointed.

“It doesn’t feel fair or just and it quite honestly feels as if the people who live here aren’t being listened to,” he said, adding that he hopes O.K. Industries will pay attention to residents and put an end to the project.

“Slow down, stop, listen, and look around on the Island at all the other opportunities to get rock. Rock is not scarce here,” Richardson said. “If they’ve invested money in this and they want to recoup it; fair ball. I’m all about helping them find a way to do that.”

But excavating for rock right on top of groundwater isn’t the right way to go, he said. 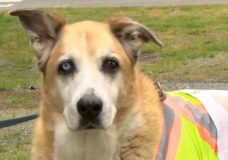