Posted: May. 2, 2021 5:10PM | Last Updated: May. 2, 2021 6:46PM
CHEK
WatchOn May 5, join NHL Goalie Kelly Hrudey and many others for a day online devoted to talking about mental health issues. Veronica Cooper has all the details in this week's Vital People.

May 3 to 10 is Mental Health Awareness Week in Canada.

To mark these important seven days, the Stigma Free Society is inviting people to participate in Help and Hope Fundraiser for Mental Health, a powerful, poignant and insightful day of support and fundraising for mental health.

“The Stigma Free Society is about creating awareness, understanding, and acceptance,” says co-founder and president of the non-profit, Andrea Paquette.

The event takes place on May 5 and features NHL goalie Kelly Hrudey and many others for a day online devoted to talking about mental health issues.

“When I came out with my personal story of having bipolar disorder in 2009, and then formed the charity a year later, [the subject of mental health] was very taboo,” Paquette continues.  “A lot of people were not talking about mental health, and people were shocked that I was sharing my story, but very grateful.”

The charity that Paquette formed was the Bipolar Disorder Society of B.C.

“We rebranded in 2016 as the Stigma Free Society, with my co-founder Dave Richardson who lives in Vancouver, and we’ve expanded the charity quite a bit over the last few years” says Paquette.

Paquette is understandably excited about the upcoming day-long event.

“We’ve never really done anything like this. There are two events. One is a premiere documentary screening, which has never been seen before, of people sharing personal stories about facing addiction, facing mental illness, living with developmental disabilities,” she says.

Hrudey, a former goalie with the Los Angeles Kings, and his daughter will co-host the other event, a livestream discussion about mental health.

“His daughter Kaitlin has OCD and anxiety. She’s become a mental health advocate, and so has he. They’re both so passionate about our cause, and are Stigma Free Champions!” says Paquette, beaming with joy.

Learn more in this episode of Vital People with Veronica Cooper. To register for this important mental health fundraiser click here. 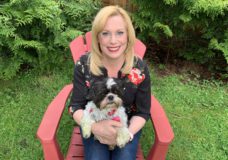