Helicopter and volunteers take on illegal dumping on Parksville mountain

Volunteers unbundled helicopter loads full of trash Sunday that was all found illegally dumped at the bottom of Parksville’s Little Mountain.

Volunteers from the Parksville Rotary Club and Backcountry Hunters and Anglers turned out in a show of community. To tackle an ugly problem that’s been plaguing the breathtaking spot for decades.

“And for people to go up there and throw it off it’s just disgusting,” she said.

Everything from cars to furniture, computers and trash has been flung over the cliff, and after round one of the clean-up took out seven tonnes of trash in May, they were back to finish the job.

“It shows what our little community can do,” said MacDonald.

“When we put our minds to taking on a huge task,” she said.

Everyone involved was a volunteer, even the helicopter pilot, who donated his aircraft– to clean up the favourite family park, that they said had been mistreated for far too long.

Their efforts are paying off. So far there is no sign of any new garbage dumped at Little Mountain since the last cleanup six months ago.

“The message is getting out if that happens,” said Bill Rawlins of the Parksville Rotary Club.

“So we were really pleased to see that nothing’s gone (over). We’ve checked every time we’ve been up there and up to yesterday nothing new had gone over the cliff face,” he said.

A third and final clean-up is planned for next spring when volunteers hope they can finally return Little Mountain to its natural beauty. 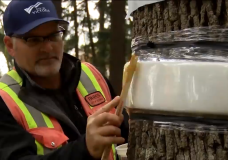 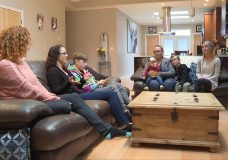 SD63 students not returning to class Monday as strike continues