Rising water levels due to heavy rainfall from a recent storm on Vancouver Island flooded several areas in the Cowichan Valley.

The grass tennis court at the South Cowichan Lawn Tennis Club had water as high as the top of the net.

Several main roads were closed to traffic but others, which also had flash flooding, remained open catching commuters off guard.

” A lot of cars aren’t going to make it through here,” said Christopher Ducharme.

“It makes me wonder who decides when the roads get closed and how they decide because I don’t think it should be open right now.”

While the effects of the overflowing Cowichan River might have been an inconvenient surprise to some, others stopped to admire the sheer force of Mother Nature.

“I’ve lived here for about 18 years and I’ve never seen the banks or the field overflow like this ever,” said Sandra Post who stopped to take some pictures.

Closer to town, workers spent the morning on Canada Avenue, one of the main roads in downtown Duncan, filling giant sandbags to mitigate the impact of the overflowing runoff.

It’s usually sent underneath Highway !, but there was so much water that the under highway culvert couldn’t handle the flow.

Road worker Bill Janssen said it the first time in ten years he’d seen anything like it in the District of North Cowichan.

As for commuters, they can expect delays as more streets get shut down due to the storm.

Police continue to stress the importance of obeying the signs.

“Roadblocks are put up for their safety and should be followed carefully,” said North Cowichan and Duncan RCMP Const. Pam Bolton.

For residents wanting to prepare for the worst, sandbags will be handed out at several locations around the Cowichan Valley. A maximum of 20 bags is allowed, but you can go back and ask a manager or supervisor for more. 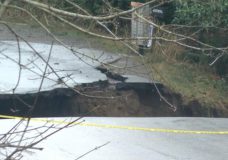 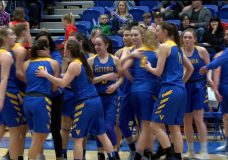