‘He was the love of our lives’: GoFundMe launched for family of child who drowned at Victoria hotel

Fundraising efforts are underway for the family of a boy who died after an incident in the pool at Hotel Zed Victoria in March.

Ethan Lokogo was 8 years old when he drowned on March 24, 2021, according to the GoFundMe page.

“He was the love of our lives,” said Andema Nkoranyi, one of Ethan’s aunts. “He would wake you up early in the morning with lots of smiles, lots of love, lots of hugs. He hugged everybody.”

The GoFundMe has been set up to help raise funds for the funeral process, headstone and to support Ethan’s mother, Kandi. The page has already reached its goal, raising more than $9,000.

Ethan and his mom Kandi were visiting Victoria from Vancouver for spring break, along with one of his aunts and cousins, according to the GoFundMe page.

“Unfortunately, the unexpected happened,” Nkoranyi wrote. “As his mom was preparing to go out to the hotel pool with him, Ethan left to swim unsupervised and it didn’t take long before his mother found him at the bottom of the water.”

VicPD officers and BC Emergency Health Services paramedics attended and helped administer CPR before he was rushed to the hospital.

Ethan’s brain was severely damaged, Nkoranyi said, and he was put on life support. Ethan died the next day.

“It’s just so heavy,” she said. “Even just talking about it, every time, we lose [our] appetite. He was like the joy of this family.”

It’s been a shock, Nkoranyi added. Especially for her sister, Kandi, who is a single mother.

Kandi couldn’t digest the situation and ended up in hospital herself for a week after Ethan’s death, Nkoranyi said, adding that she might not be able to return to work any time soon.

The community is rallying behind the family, offering support in any way they can.

“This mom loves her child so, so much and needs the help right now,” said Scott Jensen, Ethan’s teacher. “I don’t want her thinking about anything other than her son, so having some sort of financial stability I think is really important.”

Ethan was in Grade 3 at Admiral Seymour Elementary School in Vancouver and had been attending the school since Kindergarten.

“Ethan’s quite a personable person, so every student, every teacher knew who he was,” Jensen explained. “He made himself a presence no matter where he went. He always had a smile on his face, always bubbly with enjoyment and excitement.”

Before going on spring break, he told everyone about how excited he was to visit Victoria.

“He’d talk so much about taking the ferry, he was so, so excited,” said Jensen. “It was like the trip of a lifetime for him.”

One of his biggest passions was busses and transit. Nkoranyi said Ethan would always tell his family he wanted to be a bus driver when he grew up. So when he got the opportunity to go on a ferry — he couldn’t stop talking about it.

“He really loved that, the idea that the ferry was like a massive bus on water just like, made him so happy,” Jensen recalled.

Aria Brodsky is one of Ethan’s classmates and has known him since Kindergarten.

“If you wanted him to be your friend, all you had to do was go up to him,” she said. “If you wanted to know something about transit, he would tell you that.”

Brodsky says she remembers how excited Ethan was for his trip.

“We thought he’d go to Victoria, have a good time and then when he came back, we thought we’d just hear all about it,” she said. “But we never did. Because he wasn’t there and he never would be.”

The funeral was held on April 12, according to the GoFundMe. The remaining funds raised will go towards supporting Kandi, Ethan’s mother.

You can donate by clicking here. 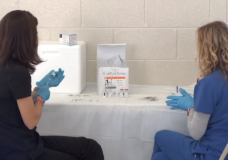