WATCH: Wildlife experts are weighing in on a dramatic cougar encounter in Victoria. A big cat was chased up a tree in a residential area and had to be tranquilized. The young male was successfully released into the wild Saturday. Luisa Alvarez has more on what may have brought the cougar so far into the city.

Gordon Stanley lives on the third floor of the Treelane Estates apartment building beside Gorge Road hospital and got a front-row view to a dramatic cougar rescue Friday.

“That’s where we saw all the excitement,” said Stanley pointing to his balcony in direct view of the tree where the cougar was.

He was just one of the dozens who watched in awe as it all unfolded.

“The backyard here was full of people,” said another resident Leonard Hemphill.

It’s not every day you find a cougar in a tree this far into the city and Stanley says it was a thrill to watch.

“He jumped over to that tree and that’s where the police officer shot him tranquilized him then he sort of got caught on the branch,” Stanley recalls.

Once the young male cougar was asleep a fireman carried him down from the tree and she was taken away by conservation who later tagged him and relocated him.

A move Former B.C. conservation officer says was the right one given the circumstances.

“In the absence of a legitimate public safety concern, I think it is appropriate to attempt relocation efforts,” said Bryce Casavant.

But It’s not always an easy decision. For this particular cat, conservation officers say he didn’t pose an obvious threat. He was healthy, showed no signs of being habituated to people and was exhibiting normal behaviour for a wild cougar.

“Why did it get here in the first place why didn’t it go out in the woods and stay there?” asked George King who also lives in the Treelane Estates.

Conservation officers believe he is the same cat spotted days before in West Shore first in the area of the Esquimalt Lagoon and then in the forest at Royal Roads University.

Casavant says it’s likely the young cougar was in search of territory.

For cougars, in general, he says urban expansion in more rural areas, as well as industrial activities like logging, is encroaching on their habitat forcing them to spread out.

“All these factors can put artificial pressure on the population to disperse in areas they haven’t been before and largely to due with searching out new food sources,” said Casavant.

While reported sightings are up Casavant says encounters are rare.

“Many people go their entire lives without ever seeing a cougar but it’s important to understand they are here we do share spaces with them,” said Casavant.

Fortunately, for the young male, his venture into the city didn’t cost him his life. And for those who witnessed the spectacle, it’s a memory they won’t soon forget.

**CHEK News has added a correction. The cougar was male. In the video, it says it is female.** 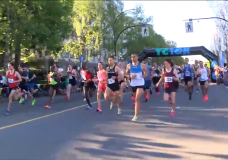 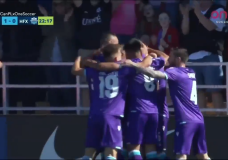