WATCH: Reaction to the British Columbia’s fish farm announcement on Wednesday has been swift and strong from First Nations communities across the coast. Skye Ryan reports.

On Wednesday, the B.C. government announced they are giving fish farm operators four years to show the open-net pens don’t harm wild salmon stocks and to get approval from the First Nation whose territory they occupy.

The announcement came as tenures expired for 20 fish farms operating around the Broughton Archipelago off Vancouver Island.

Many First Nations people on Vancouver Island have said farmed salmon are reducing wild salmon stocks and endangering their people’s way of life. Richard Chickite, a fisherman who has fished off the waters of Campbell River for 50 years, said since fish farms moved into the area, salmon stocks have never been the same.

“Oh the fish went down to nothing around here pretty well,” Chickite said.

“See all those boats are just tied up.”

One of the boats is Mark Assu’s vessel.

“[A] long time ago, I used to fish three or four days of the week. Now you’re down to maybe one 12 hour day,” Assu said.

Some First Nations people are disappointed that there was not swift action from the provincial government, including Assu.

“It should be shut down permanently not give it another four years,” Assu said. Chickite also said shouldn’t take four years to get the farms out of the water.

“It should take then four days,” Chickite said.

Hereditary Chief Ernest Alfred from the ‘Namgis First Nation said the new policy is a start.

“Today’s announcement was a very bold step by the government. It wasn’t the answers we were looking for which deals with the farms in the Broughton but still, we believe this is good news,” Alfred said.

The province and Broughton Archipelago area First Nations are still in talks to resolve urgent concerns involving farms in that sensitive area. Those leases are not part of the new four-year policy.

“We’re pretty confident that they will do the right thing and not renew any of those tenures,” Alfred said. 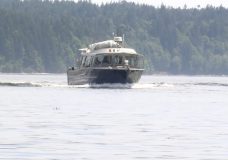 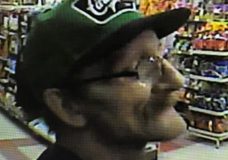 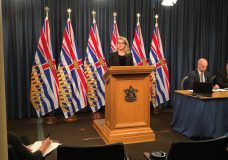