Farmers in B.C. have faced a difficult year when it comes to weather, and the snow this week is the latest challenge.

“Up until two weeks ago we were still having 21 degrees so the shift has been pronounced but the autumn just lingered and that’s what really saved our season was having that warm spell,” Croome said. “It’s been an extremely weird year, it’s been a particularly challenging one. It’s the one that’s probably tested us the most since we’ve been doing this.”

On Croome’s farm, there are still hundreds of pounds of parsnips and carrots to pull from the field, after a spring planting that started later than ever, due to cold wet conditions, and then a drought and record-temperature filled summer.

He says fall came through allowing crops that did survive the extreme seasons before, to flourish and finish in big yields.

Long-time resident Mike Morrell says it’s hard to predict what weather is on its way next.

Both people and animals are struggling to acclimatize to these snowy conditions. At Island Pacifica Animal Sanctuary on Denman, there’s extra straw for the pigs to cozy up in.

“It turned very fast, it was hot and dry for so long and the temperature just dropped and you know we have to be on it,” said Cheryl Henkelman of Island Pacifica Animal Sanctuary.

Due to the temperatures, the sanctuary has some extra costs including in melting the frozen water tubs. Feed for the animal is also rising in cost for the 60 animals including turkeys, goats and cows living on the sanctuary.

“I’ve used up most of my savings and that’s just how it goes but we’ll just keep plugging away,” she says. “It’s not something that we’re willing to say ‘well we’re out of money that’s it, goodbye.'”

The animal sanctuary has a GoFundMe for help covering costs that can be found here. 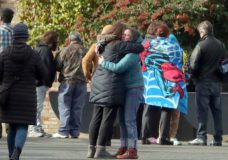 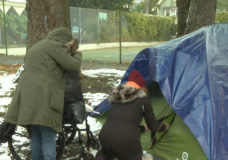