Family and friends remember the man behind ‘Plasterman’ living statue

Posted: Aug. 25, 2020 6:49PM
CHEK
WatchIt's a loss being felt by the entire Victoria community. One of downtown's most loved buskers, the Plasterman, has passed away.

Clark passed away suddenly and unexpectedly on August 6 from a heart attack, due to underlying heart conditions he was unaware of.  He leaves behind a sister, two brothers, his mother and a 22-year-old son, Daniel Roden Clark.

For as long as Roden Clark can remember, his father has been the Plasterman. Clark had been busking in the lower causeway of the Inner Harbour for 20 years.

“When I was a kid, I would participate in it sometimes actually,” Roden Clark said, smiling. “We had a little statue costume for me and I would go out there and stand beside him sometimes.”

His father would dress up in white from head-to-toe, standing on a white, painted box with “Plasterman” written across in black letters.

Roden Clark loved to watch his father perform as Plasterman and watching people react to him always gave him a good laugh.

“It’s a pretty convincing outfit, so they’re not really sure if he’s a statue or not. [Then] he does a sudden movement and they freak out,” he said, laughing.

It was easy to see that Clark loved his job as a busker, according to his friends.

“Clark had a really infectious sense of humour and a real love for life, you could tell by what he did for a living,” said Todd Cameron, who has known Clark since 2010.

“It wasn’t easy to stand in the sun with complete makeup head-to-toe, long sleeve shirts in the burning sun for hours at a time. But he did it, and he did it because he loved making people smile, making people laugh.”

Gord Bestwick has been a close friend of Clark’s for 16 years. During that time, he watched Clark perform as Plasterman many times, but never grew tired of watching him in action.

“I knew both halves of him,” said Bestwick. “As soon as he stepped off stage, he was quite a chatty person. But being Plasterman, it was watching somebody craft kindness.”

One particular moment really sticks out, Bestwick recalled. A group of tourists from Asia were watching Clark still as a statue, in character as Plasterman.

“There was clearly a language barrier,” he said.

The group walked up to Plasterman and were unsure if he was a real statue or a person – until he moved.

“They were surprised, but they weren’t scared or shocked,” Bestwick said. “It was a moment of pure joy and delight. And it was kind of at that moment [I realized] what he did transcends language and it transcends culture. There’s something that was very pure and joyous about what he did.”

Clark was very well-known in the busking community and loved by his colleagues.

Claire Bezuidenhout is Victoria’s Copper Cowgirl, another living statue. She met Clark 13 years ago when she first began busking in the causeway.

“He was just kind of a staple of the causeway,” she said. “He was always there and always really positive. It’s going to feel so strange without him there and I’m going to really miss him a lot and I think a lot of people down there will.”

When Clark wasn’t busking, she added, he was doing yoga, drinking coffee, or exploring his creativity through other avenues.

Plasterman wasn’t his only act. He was also “Floyd,” a pink statue, “Dorian,” a cement-looking character, and the “Painter at Rest,” who was splattered with paint and sitting down.

“He’s just this beautiful soul,” said Lila Carter, another one of Clark’s friends. “There’s just so much creativity and passion for his craft and his art and I feel he touched a lot of people’s lives through his art form that he did.”

But his most popular character was always the Plasterman. The story for the act came after Clark saw an image of a white mannequin dressed in all white, according to his website. He made a joke about the mannequin being “totally plastered.” And just like that, the character was born.

“He had this secret identity and his superpower was bringing love and smiles to people,” said Cameron, smiling.

Clark’s spot on the inner causeway may be empty now, but his memory lives on in the hearts and minds of his family, friends, and those he’s entertained for the last 20 years. 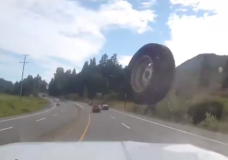 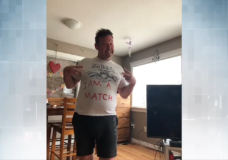