WATCH: Emergency Response Team and negotiators dispatched to Victoria neighbourhood after report of weapons inside a home. Isabelle Raghem reports.

The Greater Victoria Emergency Response Team (ERT) was dispatched to a residence near Jutland and Gorge Rd. East Saturday, after receiving a concerned call of possible weapons inside a home.

It happened at house at the corner of Cecelia and Manchester Rd.

Neighbours say the police presence began around 8:00 a.m. and didn’t die down until after 2:00 p.m.

“We received calls regarding an individual in a residence that made some concerning statements, officers attended and realized they needed to call further resources,” said Victoria Police Spokesperson Bowen Osoko Saturday.

“Part of what’s prompted this response is there has been a concern about a report of weapons in the residence,” added Osoko, “depending on how the investigation goes, we’ll see what the next steps are.”

Nearby resident Lorraine Trotman says the house involved is a halfway house that has had a good track record over the years.

“We have two halfway houses on this street and I’ve been here for 20-years we’ve had no peep out of either one, until now.”

Cries of distress from the man inside — yelling he feared police would shoot him — had those in the area shaken.

“It’s scary,” said Leah Chad who was visiting her mother in the area, “It’s been going on all day so I would imagine it’s a lot for everybody.”

The man came out of the house around 2:00 p.m., before being driven off in a police cruiser to be taken to a local hospital.

No word on whether or not the man is facing charges or if there were in fact weapons in the house. 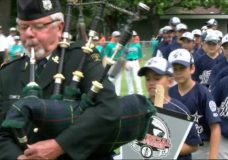 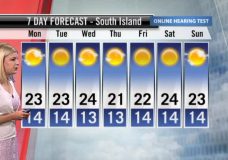 Trading in grey skies for sunshine this week and warmer temperatures