According to the weather agency, strong winds that may cause damage are expected to hit Greater Victoria, both the east and west coast and northern Vancouver Island on Monday, Nov. 8.

“This is a big storm. We’ve had a few big storms already. In fact, it’s been stormy since mid-September. We’ve had our fair share this fall,” said Armel Castellan, warning preparedness meteorologist with Environment and Climate Change Canada.

The high winds are expected to last until Tuesday morning and may cause some significant damage.

“The biggest problem we run into is the trees. And the trees fail and they run into other things, the wires and all that kind of stuff,” said municipal arborist Oak Bay Chris Paul.

“And if you do get a tree down, make sure you don’t go running out there to take a look at it, particularly if the power goes out because that means they’ve taken out the wires and those wires can still be live,” he continued.

Paul said it’s best to inspect your trees with an arborist frequently in case there are any defects, but that could be tricky at such short notice.

For now, he urges people to park their cars and store any valuables away from any trees as they’re bound to be some that fall over.

“There’s always going to be stuff flying around in this kind of weather,” he said.

Castellan said weather like this aligns with climate change projections.

“We are going to see more extreme weather at a higher frequency, at a higher amplitude, longer-lasting than we’ll ever seen in previous decades in the recorded era since pre-industrial times,” he explained.

Environment Canada notes that an intense Pacific front will arrive along the BC coast this afternoon and that the front will spread strong southeast winds of 70 km/h gusting to 90 this evening.

The winds will shift southwesterly and ease Tuesday morning in the wake of the front, according to Environment Canada.

“Damage to buildings, such as to roof shingles and windows, may occur. High winds may toss loose objects or cause tree branches to break. Avoid wooded areas to prevent injury from falling trees or branches. Campers should move to sturdy shelters,“ reads a statement from Environment Canada.

Alerts and forecasts can be monitored on the weather agency’s website. 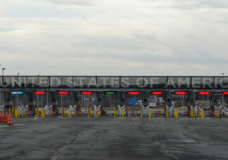 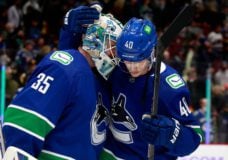